My mom was a big supporter of Santa Claus. Actually, it wasn’t until the first Christmas after she got married (at age 17, and Santa didn’t come) that she learned the truth. But despite that knowledge and a short, rocky marriage, she instilled in my brother and I the confidence that we could ask Santa for whatever we really, truly wanted. If Santa could afford it, that’s what he’d bring. 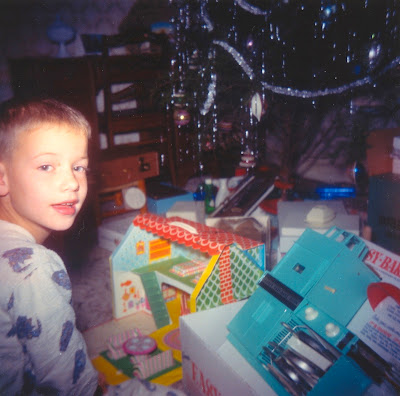 I think my older brother was on to mom and started working the system.
But I believed in the man who didn’t judge me wholeheartedly.

All our Christmas photos show the clear difference between my brother and I: He’d get a rifle, and I’d get a pogo stick with pink tassels on the handle bars.
Santa kept me stocked with dolls and even a patent leather purse once.

Here’s a photo of the year I scored both a dollhouse and an E-Z Bake Oven. Santa (and his helper) never disappointed, except that my mom didn’t have a lot of time to pull off all this magic.

So we were raised with the slogan, “Santa doesn’t wrap.”

Thus, anything from the North Pole was laid out under the tree in it’s original box. But it was fine. My brother and I had no trouble figuring out which present belonged to who.

And although I was teased and tormented throughout my school years for being a sissy, I always knew Santa was my safe haven.