While I look like a happy go lucky teenager, that was just not the case at this time. I was in such turmoil about my sexuality, I often contemplated hurting myself. 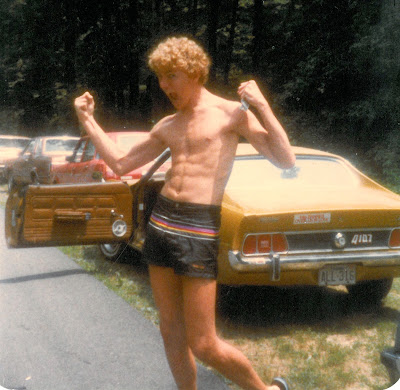 I was raised in a very religious home. The bumper sticker on my car behind me says, "His Banner Over Us is Love" - and I was horribly conflicted as a teenager.

Thankfully, I soldiered through it all, and I am now a successful CFO of a
multi-million dollar company. And my partner and I will soon celebrate our
16 year anniversary, and life is so, so very good now.

When I look back now, I think, “Well, no duh - I’m gay!” I can recall buying my first Green Day CD, with a recurring fantasy where singer Billie Joel Armstrong and I run away together. I was young so I never had a sexual attraction to him. But for some reason the fantasy made me feel safe. When I played with my Lego people I only had one girl, so many of those toy pairings were gay.

But I never really realized exactly what I was doing.

My best friend since I was age 1 turned out to be homophobic, and I repeatedly defended the gay community when he claimed that all gay people were going to hell.

Yet I could never bring myself to identify as gay myself. I knew it was there, but I just did not recognize it.

My first boyfriend was one of my best friends and we are still close today. I have taken guys to every school dance since I came out, and fortunately I've survived high school without too much bullying.

It certainly was not easy sailing, though, and I had many nights where I cried, ready to swallow a handful of pills and end it all. I'm sure glad I didn't!

And today, I am thankful that I am gay.

Being out has even brought my dad and me closer. I'll talk to him about boys while we work on his car together. It is completely ironic, but it's home.