I was born n' raised in a small rural town in Oklahoma. My Daddy was the high school football coach, my brother was the all-star athlete, and my uncle (my Dad's older brother) is Mickey Mantle of the New York Yankees. No big deal, he's just mentioned right up there with Uncle Sam, apple pie, and Jesus Christ. 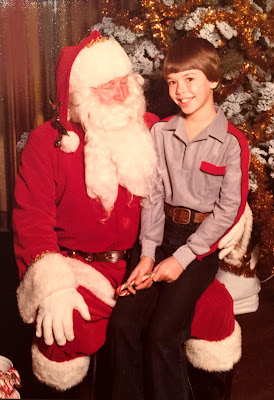 And then there was ME!

Townsfolk would ask, "Kelly...you gonna grow up and be a famous baseball player like your Uncle Mickey?”

Because one is just about as likely as the other.

The only thing Uncle Mickey and I had in common was switch-hitting!

As a kid, I used to dress up in Grandma's clothes and play Dolly Parton songs on my lil' geetar.

And they had no clue what the hell was happening!

But regardless, I was blessed with parents who always encouraged me to embrace my differences and “eccentricities.” They accepted me as every parent should for their child! Bless their wrinkled little hearts.

And as you can see in this picture, I LOVED being a little girly-boy. I think I had just told Santa that I wanted a Barbie, a boy, and some boobies! It made him very uncomfortable, and I didn't understand why. Because I loved being different than my peers, and I wasn't ashamed to be me.

That's a true testament to my upbringing.

But, like most of us, I had my fair share of getting bullied from time to time. Usually from kids from other schools at out-of-town events. Their favorite taunt was always "Are you a boyyyy or a girrrrl?" And I'd say 'Both!' Like it was a bad thing? I never could figure that out. Who wouldn't wanna be both?

Luckily, because of our LGBTQ pioneers that came before me, we now have terminology that kids can use today. In my case, it would be "gender-fluid."
Or as I prefer, "two-spirit" because after all I AM a Cherokee Native American Poke-A-Hot-Ass from Oklahomo.

So when I look at this picture of me and Santa, that's who I see — a late blooming two-spirited little gender-fluid kid, almost too comfortable in my own skin — but unsure how to explain it to others. Yet, never afraid to show it or be it, and most importantly — never once told to hide it.

And that would be my Christmas wish to Santa today — for every little boy and girl and in-between to be given the freedom to be in love with yourself exactly as you are! And to realize that when another person tries to hurt you, they're actually the one who's hurting.

Because people who love themselves, don't hurt others.
So don't ever let anyone change who you were born to be.