Growing up one of my favorite places was the Richard Simmons workout studio. Tucked away in a strip mall in our suburb between a Chinese restaurant and a Baskin Robbins, it was aptly called, “Slimmons.” My mom would take me with her after work, but I didn’t join the other kids in the play area. I’d sit in the back and watch the overweight women flapping their arms in the air as they sweated to the oldies. I memorized the routines, so sometimes I’d join in the fun. After class, we’d pick up Chinese take out and a pint of Rocky Road for dinner. 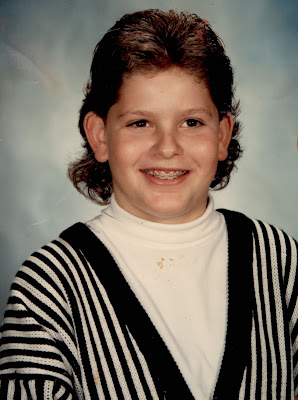 One evening, I had to use the bathroom. On the bathroom wall was a large poster of Richard Simons dressed in his iconic red striped shorts and rhinestone studded tank top.

I loved and hated Richard Simmons at the same time.

I appreciated him for his flamboyant exuberance, but I was also embarrassed by it.

I sat down on the toilet and grabbed the magazine on top of the stack – Muscle and Fitness.
I thumbed through the pages looking at pictures of scantily clad, bronzed men and women.

But when I reached the centerfold, I was paralyzed.

The left side of the page was a woman in a gold bikini flexing her biceps. Meh! On the right was a man in a royal blue Speedo holding a bar bell over his head.

My eyes raced over the picture of the woman, without so much as a glance, and landed in the center of the right page - directly on the man's Speedo bulge. I felt a spark, a tingle, a jump. This caught me off guard and I quickly looked up.

My eyes landed on Richard Simmons' photo again - and he glared at me like he knew my dirty little secret. So I shifted my gaze back to the magazine first to the left side, at the woman. Again, I felt nothing. I then looked back to the right, at the man - and I sure felt something.

And it was at that moment - as I took a dump at Slimmons, with Richard glaring at me - that confirmed what I had been trying to suppress for years:

I was definitely gay!

Editor's note: you might remember Shaun from THIS brilliance! :)