I'm pictured on the right with my sister Louise. This photo was taken a few months after I'd chopped the left hand side of my hair off. It was really long and I wanted it short! My father said a big fat "No!" to that idea, as he preferred girls to have long hair. 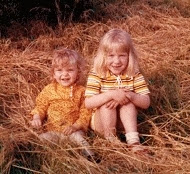 So at the age of 4 I took matters into my own hands and cut it. I stood on a chair at the kitchen sink and proceeded to cut away, only to be discovered by my mum!

As she walked in I was trying to wash the evidence down the sink, as if it wasn't obvious! So my mum decided all she could do was to cut more to even it all up.


Then my father walked in. And oh my God, he went ballistic and thought mum was the one who'd initiated said chopping.

I hasten to add that I had to wait another 12 years before I got my way and had it cut lovely and short, and not looking like some strange bob cut.

Even at age 4 I preferred boys' toys, wanting short hair, climbing trees, and when I had the chance, wearing trousers. My parents never stopped me in those activities, and they even made me a fort with painted toy solders to go with it.

I even remember fetching some dolls to bring to school so my friend Steve could play with them. And Steve would fetch his big red truck for me to play with.

For a long time, being gay wasn't even about me. I know it should have been, but being gay was about proving the jerks at school right, or possibly alienating or disappointing family. And, in a way, giving up power to every person I met who might find out and use it against me. 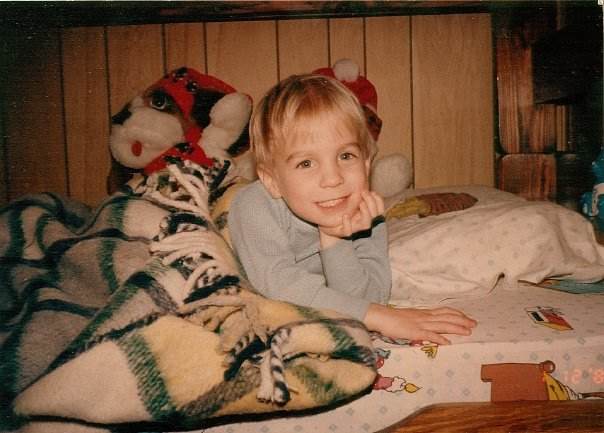 I can remember my first crushes being Christian Bale in "Newsies" and Neil Patrick Harris as Doogie Howser. I imagined what it would be like to go to high school in California, with the hopes they would date me.

And I remember the nights my mom and I snuck away to her office to watch TV shows my dad didn't watch. We both saw Ellen Degeneres stand in front of millions of people and say the words I could not. But I thought, 'God, if she can do that, surely some day I can at least say those words to my mom.' It would be another decade before that would happen.

Growing up in a small town - the only county in PA without a traffic light - wasn't exactly the most open-minded experience. And, despite my parents being among the most liberal adults in the county, being gay just wasn't an option.

It wasn't something I often saw hated-on publicly, but then again no one ever came out in my school or town. So it was more like gay people didn't exist, or shouldn't exist.

Yet, I didn't let that stop me. I always pursued being in the band, choir, and theatre - despite the association and being called "faggot, gay-bait, homo."

Editor's note:
Just as I was posting Luke's story, I noticed the visitor counter number!
So today's post is just 4,444,444 THANK YOU's to everyone here! :) 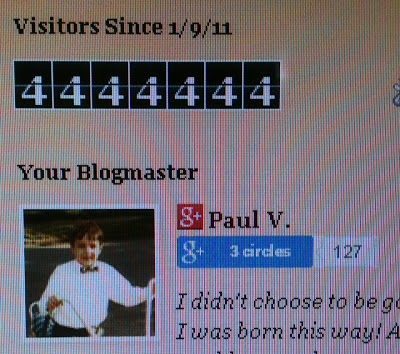