"Once upon a time, there was one little boy who went to a car show..."
Specifically, it was the "World Of Wheels"1978 car show, and I'd spent weeks begging my parents to take me to the show! 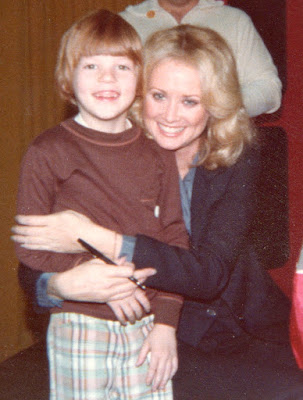 My dad was thrilled, as I'm sure he believed that his son had actually developed an interest in cars. The same son who played with dolls, whose favorite comic books were "Supergirl" and "Wonder Woman" and who insisted on getting a "Dorothy Hamill haircut."

You can see the compromise we ended up with in the picture.

Of course, my dad had no idea that the REAL reason I wanted to go was that Laurette Spang from "Battlestar Galactica" was going to be there. And there she is with me in my photo!

She was one of my favorite people on the show.
Of course, I had no idea her character was a professional escort.

I didn't know what being "gay" meant before 1978, because I'd never been told the term by my parents. I knew I was "different" from the other guys because whenever I (regretfully) found myself grouped with the boys, I was so bored by the things they loved: sports, cars, sports, trucks, sports, boats, sports. Yawn. Whenever I had the chance, I preferred socializing with girls, who were SO much more intellectual and interesting.

However, in 1978 an older neighbor guy moved in next door and I developed a massive crush on him, to the point where I was actually writing out his name in a notebook over and over like you see in bad TV movies. I never acted on my dreamy-eyed crush, but I was dimly aware somewhere in my brain that things would be bad if ANYONE found out about my feelings - including him.

I never  suffered any real abuse for being gay in my early life because I was always "the weird kid" who was viewed as super-intelligent with odd interests, like obscure horror movies and sci-fi shows from other countries.

That all changed in high school, though. In my first year, my parents sent me to a private, religious all-boys' school and it was a living hell every single day. I was miserable, and I barely attended classes because I always felt sick and scared.

I was failing all my classes and there were even days where the priest-teachers would spend hours explaining to us all why people like ME were awful monsters. They even instructed the other students to identify suspected gay kids for treatment and counseling because such a "gross" life needed to be "corrected."

Fortunately, I got myself into a public school, then a good liberal college where I could express myself and be who I really was. And I haven't looked back since.

Coming out was a weird sort of non-event. I had attended a Gay Pride parade during college and my folks saw me on TV. They asked me why I was there and I confirmed it. Then they simply ignored it, and acted as though it didn't happen. To this day, they talk to me like I'm straight, so I've simply decided I'm not going to make myself suffer for their denial of reality.

Today, I work in an excellent government job with a very tolerant environment where differences are encouraged. I have a terrific life and think of myself as being truly lucky to have gotten where I am today. Without those early experiences, I wouldn't be where I am now.

My message to gay youth today is:

No matter how painful an experience is, remember it's your decision every time how you react to it. EVERY decision you make helps turn you into who you will be in the future. I turned out great despite all the adversity and I enjoy a great life of success now.

So, please, PLEASE turn your agonies into strengths, and your sorrows into the foundation of your character in handling tough times.