I'm here in the middle with my younger brother and sister. I was born on a farm in a family of seven, and we moved to the city at age 5. Before moving, I was invited to stay overnight at my neighbor Maryann's place. I assumed I would sleep with her, which made her parents laugh. They refused with no explanation, leaving me puzzled and offended. 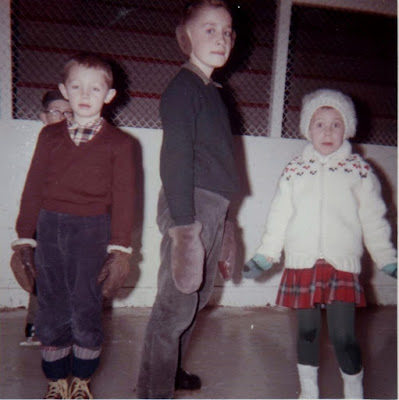 I had no sense of sexuality till the bullying started in grade 7, and even my home room teacher encouraged it. It turns out he was getting it on with a girl in class.
I volunteered at recess to clean his blackboards so I wouldn't face the bullies.

Instinctively, I was sucking up to him (figuratively) to neutralize him as a homophobe - before I even knew I was gay! Even that lecherous teacher was better than recess that year.

Prior to that, I had friends. And a few guys that I liked especially and who remain in my mind as innocent loves. They let me play soccer (badly) and treated me like one of the guys. I thrived on the comraderie.

I remember in grade 8 a loudmouth teaser tormenting me in the hall, and my friend Bob grabbing him and telling him to stop taunting me. My knight in shining armor was thoroughly a jock and very handsome. Why was he so willing to stand up for me?

Bob even took figure skating classes with me for a while 'To improve my skating skills' and let me play hockey (badly) in his backyard with his other friends.

I wish I had learned team sports, but I lacked the jock spirit.
Instead, I filled my plate full with studies, playing piano, and skating.

Then came high school, which was great. No taunts! I was good at gymnastics, and the teacher made a point of praising my athletic ability in gym class.

Those were idyllic years.
My crushes remained fantasies, but they were still vivid.

I remained in the closet with my family, where there was much upheaval and much heartbreak. I breathed a sigh of relief when I began university far from home and could starting dating etc.

I met a very effeminate, pushy guy from the US on a choir tour, and the sex we had was a nightmare! He eventually hitchhiked back to school - unannounced - and was camped out in my dorm room when I returned, much to the hilarity of my dorm mates. I was a victim, and that episode scarred me for life!

So my story has no 'happy ending' yet.
Sadly, I keep looking but never seem to find a stable relationship.