I'm sitting here at our campsite on Papoose Pond, wearing my Indian headband with the pink feather in front like a showgirl. Toes gleefully pointed. Smiling.
It's possible this photo was taken at the very moment Judy Garland died. 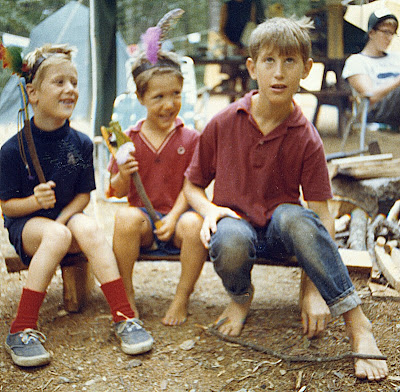 I was always dressed in red, my towheaded older brother in blue. Later that got switched. Maybe my mother thought I'd attract less attention in blue.

I was a good student with plenty of friends, until my town merged with another in junior high. Kids I hadn't grown up with tormented me. The dreaded F word. Some old friends jumped ship and unfriended me. I tried fitting in for about a minute, but this was classic rock country, and I liked Blondie and The B-52's.

I told my girlfriend I was gay. She told me she was a lesbian. Other friends I told were cool with it. In high school the artsy upperclassmen protected me, and the worst was over by about 16. I didn't come out to my parents until after college. Mom wasn't surprised, but Dad laughed and said he never would've known.

When I moved to Hollywood there were gay people everywhere. I became a noted drag performer (the original Sharon Needles) and made fabulous friends. I wore red unless I'd bleached my hair, in which case I'd wear blue.

And I loved my big gay demimonde.

After I moved back east to be near my dying father, there were some unhappy years. The bar and the after party are the wrong place to grieve. Happily,
I bounced back, and I'm grateful for my life today.

Being gay doesn't define me. I'm much more than just that.
But looking at this picture now, I absolutely love it. That's the real me.

And I want to keep that kid smiling, and maybe give him another feather.

Going through my fathers' pictures for his 50th birthday, I came across this one. It was taken at my grandmother's house in Tulsa, Oklahoma. 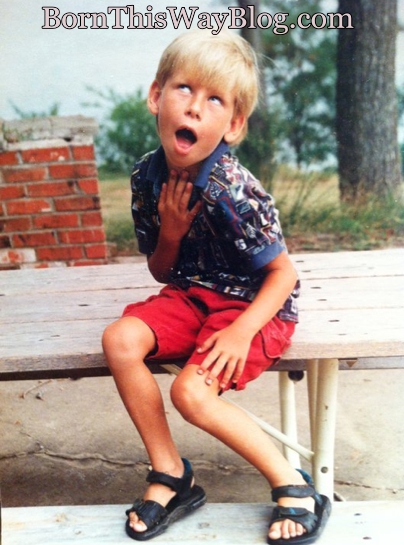 I had the best memories there, hanging out at the lake with my dad, and just being a crazy kid.

I'm 22 now, and a working performance artist. As this picture shows, I had a flair for the dramatic at an early age!

Looking back, I don't consider myself overly flamboyant.

I just had an amazing support system, so I didn't care about the perceptions of others.

And I must say, I couldn't have asked for a better childhood.

The birthday teddy bear is Pierre and that's my beautiful mother, Judith. I hadn't seen her in about a year, so this day was special, as she had come home. My parents had a tumultuous marriage, and she often ran away from her problems. 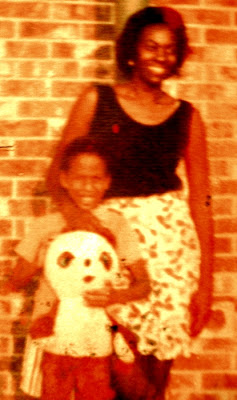 As I saw her arriving from afar, I didn't recognize her at first. But I remembered the wind blowing through her hair and playfully ruffling her skirt. Her vision was beautiful, statuesque, and breathtaking.

My parents had 10 kids, and I was the youngest and gayest. By 8 I knew I was different than my 4 older brothers and father. I had more fun with my 5 sisters than any young male child should have.

The fact that I had a huge teddy bear in my hands, at that age, was proof enough. My love for musicals hinted also.

I was called "sissy" and "girl" etc. by my siblings and others. And unfortunately, my parents were Jehovah's Witnesses for a time. I joined when I was much older.

I was trying to escape my gayness, and was "disfellowshipped" at age 21, because
I kissed a guy. By that time, my mother had passed on when I was 17, so I was dealing with a lot. I tried suicide many times and, thankfully, never succeeded.

Now, I'm almost 45 and I'm very happy that I'm still here.
Presently, I'm single, but I know there's love out there for me.

As for you, just be who you are! LOVE yourself, and don't waste time trying to live the life others hope for you. It's not worth it. Remember that you were born this way, and there's nothing wrong with that at all. 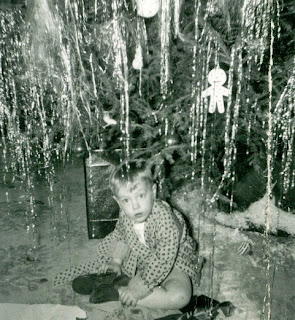 I was the seventh of eight kids.
As a child, I always loved books, Christmas, and anything fantastic or magical. This photo was shot during Christmas, 1953.

Unfortunately, our dad was a recluse and a compulsive eater. And he failed to protect us from our Jekyll and Hyde, alcoholic, pedophile mother.

Or from my abused, mentally ill older brother, who terrorized and humiliated me for being sensitive and empathetic.

At age 12 I discovered muscle magazines, and realized I was sexually attracted
to men. It took me many years to accept that this was OK. I even converted to Fundamentalist Christianity to escape my sexuality. Of course, it didn't work.

I am 60 now, and glad to be gay despite my PTSD diagnosis, and the fact that being overweight marginalizes me in gay culture.

For this kindergarten photo, I told the photographer I wanted a "serious picture." But the more he tried to make me smile, the more serious I got. And I do NOT like this dress. I wanted to wear my fireman's hat, which I was usually allowed to do, as my parents weren't really invested in any particular gender expression. 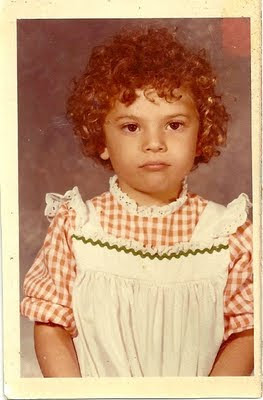 I love this picture because of its emotional honesty: I'm not smiling because I don't feel like smiling. And no one was going to push me into feeling or doing something I don't want.

While this is harder to accomplish as an adult, it's always my goal.

At this age, I knew I was a little different, and had a nascent crush on my kindergarten teacher. But I didn't yet have the words for it.

I went on to be viciously bullied in middle school, and I hope those kids are all in jail now.

Today, I have a loving partner and a diverse group of friends, and I became a writer and a teacher.

Bigoted speech -- especially the phrase "That's so gay" -- is forbidden in my classroom. Consequences are swift and severe, if I hear it.

My message to LGBTQ youth is:
Respect yourself! And do not "ignore" the bullying, because it doesn't work.
It only makes you more vulnerable; more victimized.

Bullies can tell when you're "ignoring" them, and it makes them want to do whatever they can to make you crack. The onus for stopping bullying is NOT on you -- it's on the bully, as well as the adults in charge.

You must keep talking, keep complaining, and keep demanding that something
be done - UNTIL SOMETHING IS DONE. Look your principal in the eye, and be sure to mention Jamie Nabozny - who won a huge federal lawsuit against his school administrators for failing to stop anti-gay harassment.

Lastly, keep saving your money...
There are buses leaving every day for other cities, and you can be on them!

This is my sister and I shot at Disney World. I find the hat I'm wearing to be a
big revel of my true self. This is how I was born, and I am free and happy! 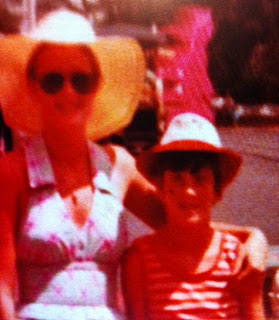 I grew up in Ft. Lauderdale, FL
and I recall being a mascot for my father's football team. And I remember my mom seeing me cheerleading in my football gear with all the cheerleaders.

I'm also not the only gay member of my family. A much younger relative just came out, and he praised me for being myself, and helping to make his experience hopeful and easier.

Today, I'm 48 and happy and living in New York City.

This picture was taken on Halloween when I was in kindergarten. My sister was 10-years old when I was born, and had always wanted a baby sister. Having two brothers already, my sister had her heart set that I was going to be a girl. 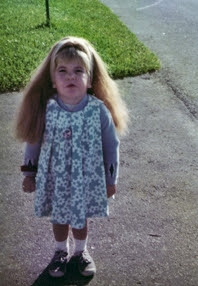 On my birthdate, my mom sent my three siblings off to school, and said that when they got home, they would have a new baby brother or a baby sister.

Well, you can imagine my sister's devastation! It wasn't long before my sister realized that I fit into her dolls' clothing, and she could make me the little sister she always wanted!

I knew I was gay around age 5 or 6.
I remember staring at my sister's boyfriend's Speedo at the water park,
and just knowing that I was different.

At times I thought my life would've been easier if I had been born a girl.

Back in the 1970's, I think the majority of us grew up in an "Archie Bunker" like atmosphere. As for my parents, they were never afraid of using the N word, and were not shy about talking about "the Queers" that lived on the next block.

I remember cringing every time they would start to talk about them, knowing that one day my truth had to come out. That, or I was going to have to run away from home to a place like Pleasure Island from "Pinocchio."

I live in Hollywood, CA now and work as a very successful makeup artist. I've worked on people like Beyonce, Lady Gaga, and Mariah Carey to just name a few. And I am living the life I always dreamed of! I look back on the small stuff now and laugh, because I remember it seeming to be so all-consuming.

For the LGBTQ youth of today, I say:
Follow your dreams and don't change who you are!
Life does get better. It gets as good as you want it to!

This picture was taken shortly after my uncle's wedding. You'll be shocked to know, that a few years later I was throwing Wonder Woman themed birthday parties and telling my parents, "When I grow up, I want to be a mommy." 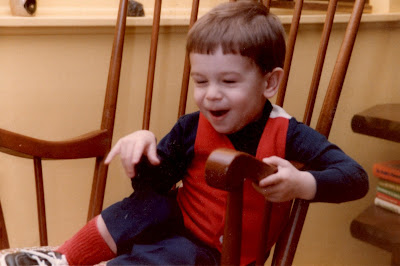 Needless to say, when I did come out 17 years later, everyone's reaction was not
"How did we not know?!" - but rather a collective, "Finally!"

It's not always rainbows and lollipops being gay, but it has gotten so much better.
Even if I'm not a mommy ... yet.