I've always been very dramatic. But my coming out wasn't as dramatic as I'd have liked it to be, as I kind of trickled out of the closet. It started with telling a couple of my close friends at 14 about being in love with the girl who played Sky Masterson in our school's production of "Guys & Dolls." 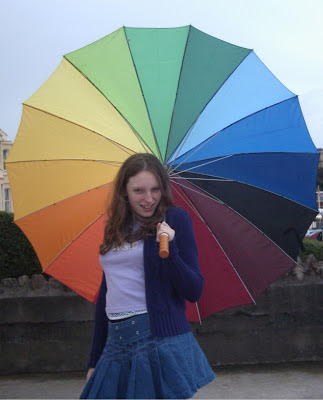 I went through the usual 'Do-I-want-her-or-want-to-be-her?' feelings. Or wondering if maybe I just liked girls because I didn't know any boys? Thank goodness for my all-girls schools though, because our drama department introduced me to the wonders of cross dressing (and ladies in suits).

I tried coming out to other gay girls I knew. But they told me I couldn't possibly know if I'd never been with a girl. After that I shut up about it.

I decided coming out at school was a bad, bad idea. I thought everyone would either hate me, or think I was doing it for attention.

So, I tried dating boys. By the time I got to University I thought, 'Why am I doing this when I could be with girls?' So I ditched the guy, cut off my hair, and bought about a million checked shirts. I was finally part of an accepting gay community!

My mum eventually found out when she found a postcard from my girlfriend signed with kisses. After all the months of her asking "Are you gay?" and me replying 'No. Why do I have to be gay to have a short haircut?' - I finally said 'Yeah, OK. I have a girlfriend'. So it was all a little anti-climatic.

Eve, you coming out story is great! I chuckled about your mum's telephone campaign. Good for you.

Lol, good for you Eve. Love the photo, I have never known you with so much hair!