I grew up in a small college town surrounded by corn fields and dairy farms.
If you threw Colonial Williamsburg, Mayberry RFD, Norman Rockwell and "Deliverance" into a blender, you'd end up with Kent County, Maryland. Every year there was a Halloween Parade and most of the kids from town would dress up in their in costumes and follow behind the high school marching band. 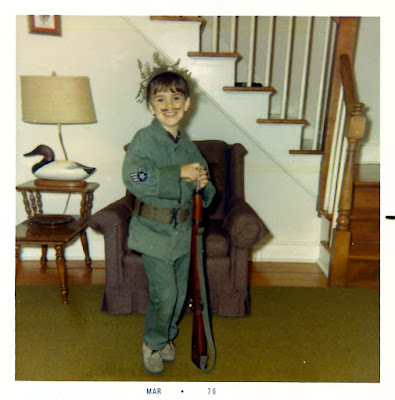 I really don't remember wearing this uniform (but I did like playing with GI Joe dolls and my friend Gretchen's Barbies too), so maybe my parents were probably trying to butch me up a bit? But as you can see, my queerness overwhelmed the intended machismo of the uniform. Nowadays I have a bit of a uniform fetish, so maybe this is where it all began?!

My home town, though quaint as hell, was sometimes a scary place for a young gay boy to grow up. Most of the kids in school were nice to me, but a handful of jocks made my life miserable from Jr. High all the way through High School.

I can remember being call homo, queer and fag and being puzzled why they were calling me these names. When I was 11, we were square dancing in gym class and one of the jocks told me that I was dancing like a fag. I was upset that, once again, I was being called a fag. And so I asked myself, 'What is a fag?'

The gay rights movement was all over the TV news at the time and I remember seeing a shot of two men kissing in the streets. As I was doing a dosy doe to some corny country song, the image of two men kissing was making me very excited. That's the exact moment that I realized that I was gay!

It would take another 8 years before I would finally comes to terms with my sexuality, but it was at 11 that it became pretty clear to me why I had crushes on some of the guys at school.

Once I was safely cloistered away in Art School in Baltimore, it was much easier for me to meet guys and figure out just who I was. Living in major cities like New York, Chicago, San Francisco and Los Angeles gave me the freedom to live an openly gay life, decades before we became a part of mainstream culture.

As the years past, I became interested in gay history and learning about what it was like for earlier generations of gays and lesbians. In the 1980's, while shopping at antique shows and flea markets, I began collecting vintage photos of men hugging or holding hands. This ultimately inspired me to create my website Homo History, which re-appropriates vintage found photos of same sex couples, who may or may not have actually been lovers.