This photo was taken at my grandma's house, where I remember listening to
Judy Garland's "Send My Baby Back to Me" on a 78-rpm record in her basement. On the left I have my Ken doll as I'm coveting my sister's Barbie Dream House that she got that day. I couldn't even take my eyes off of it posing for a photo! And as you can see, she's trying to get me to face the camera. 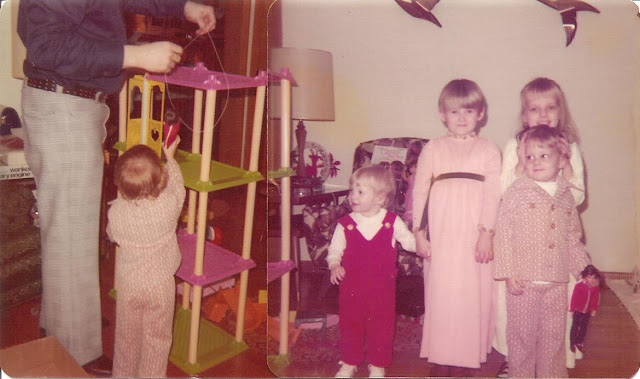 I first realized I was "different" in 7th grade. I prayed that it wasn't true and that I would change, but I just didn't find girls attractive. I didn't really know what gay meant though, so I thought maybe I was supposed to have been born a girl.
I was pretty tormented emotionally, and I felt depressed.

My same-sex crushes were the boys on "Eight Is Enough" - all of them. My mom tells me I was in love with Chastity Bono, so go figure. Closeted through high school, I don’t remember being picked on for being gay. But, I'd been bullied and teased because of my size and lack of athletic interest and ability.

When I turned 25, I was given the greatest gift: self-acceptance. And I remember feeling as though a huge weight had been lifted. Upon reflection, I realized that I had always been gay and soon began coming out to friends and family, and I finally came out to my mom 3 years ago.

Today, I live as an openly gay man. I've been told by straight men that they respect me for being who I am, and that makes me feel great. I feel that I should use my position to educate others, to pave the way for future LGBTQ kids so they don't have the fear of being "found out" that they're gay.