My childhood consisted of lots of church. I was raised in a conservative, fundamentalist Christian home. My family’s circle consisted of members from our own religious affiliation. And our family vacations were just trips to attend church conventions. Television and dancing were not allowed in our home. 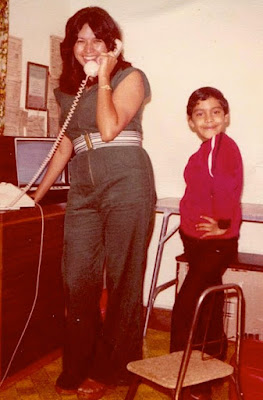 As a teen my parents’ TV ban relaxed, and I was introduced to pop culture icons like “Wonder Woman,” Donna Summer, and "H.R. Puffnstuff."

TV revealed entertainment that a boy like me was naturally inclined to enjoy. My male cousins watched sports and wrestling, which I found boring and stupid.

I attended 8 different schools because we kept moving. The changing of schools always left me with a feeling of being different, odd and left-out.

Adding to my dilemma, I was terrible at sports and was always chosen last for teams.

Later, I came to the realization that my out-of-place feelings were not because I was the new kid or because I lacked skills for sports. But rather, because I was gay, effeminate, and everyone could see it.

Childhood was not easy, especially hearing awful insults at school. But then to also be in the house of God and hear the same messages made my life feel worthless and insignificant.

I did excel in academics and that opened a way out of my sheltered upbringing.
I was able to attend and live on-campus during my college years. During those years, I did a lot of self-discovery and learned about self-esteem.

Today, I attend the Metropolitan Community church,  and I've met many friends with a similar upbringing. And I finally feel like I found my own tribe!

what a great glimpse. The story totally hit home for me. You have a great way with words. That picture of you though....lol. Adorable.

The part where you say that as a child you would sit in church and feel like your life was worthless-- wow. When I read that, I wished more than nothing else, that I could reach out to that kid. The kid that is hurt by those words and give him a big hug. It brought up a memory that I have of the last time I chose to attended church services.

Church was also a constant in my family. I went through the baptism, the 1st communion all the steps that a good catholic boy goes through when his grandma is a well known member of the church community. lol

Anyway, I remember years later sitting in a church in Culver city, with the ex love of my life and his mother. It was around the time that Prop 8 was just coming about, and people everywhere were weighing in on the proposition, even the church.

During a catholic service, towards the end of the mass, there is a time when the priest will offer up certain petitions so that all members of the parish can pray for those in need or in this case, those in power. The priest stated that the prop was up for a vote and he wanted the church to pray for the hearts of that held the authority to either have the prop pass into law or have it be passed up. He wanted us to pray that GOD touch their hearts and make them realize that a marriage between two men is not what GOD wanted. He asked us to pray that the prop would not pass and that the sanctity of marriage be saved.

I sat there and I remember thinking that the church will not recognize me as someone who can marry another man because it was not traditional and not what GOD wanted. YET, the same church that is saying that I should not be able to marry because I am gay, will accept my money when the collection basket is passed around. My gay man money is good for enough for the Catholic church, but not my freedom to marry.

I am happy that you found a church that accepts you as you are. As for me, I also moved on. Science is amazing isn't it?

I'm happy to know that my testimonial had an impact and shows that a lot of us have similar paths that led us here. Many of us were hurt by well-intentioned church folk. We are not trash and this Bible verse says so.......

"I praise you because I am fearfully and wonderfully made; your works are wonderful, I know that full well.” -Psalm 139:14

So there it is! We are wonderful! I think the more modern word is FABULOUS!

I'm happy to know that you survived!