Many people here say how "different" they felt. At a very early age, I always had a pretty strong concept of my own ego. When I was around 7, I wondered if I was the only real person, and that everyone around me was there kind of robotically, for my benefit. So in my mind, it was everyone else that was different. 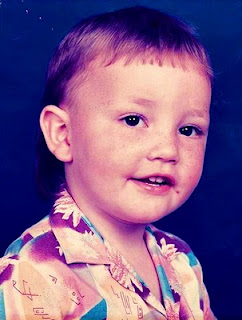 This type of thinking allowed me to be whoever I felt I was for my entire childhood. This included loving Rainbow Brite, having a Cabbage Patch doll named Vernon, learning how to do hair on My Little Pony dolls, and dancing with my friend Bree to Cher's "Shoop Shoop" song.

I was a kind of girly and hung out with my girlfriend in dance class.
We had blatant conversations about sex from an early age, and we were both fairly inquisitive.

She was a tomboy and the most popular girl in school. I spoke to her a while back, and she confirmed that she's a lesbian.

My parents moved me away during high school from a place where someone would get bashed for picking on me, to a school in the country where bigotry was standard. I wasn't popular anymore and didn't know a soul. But the person I loved the most was my best friend Michael. To get around being able to talk to Michael about my feelings for him, I described my super crush in question form.

I also treated Michael like sh*t. I did this because I loved him so much, but I knew deep down I could never have him. No matter how many times we slept in the same bed. I used to cry myself to sleep every night because it was heartbreaking to me that gender meant so much to the world, when it meant nothing to me.

My coming out story was so much simpler. Rather than sit people down to give them some 'big news,' I just started being honest. If I thought a guy was hot, I would say so. Same as with a girl. I was the first person to come out at my country high school, and I only got called a f*ggot once.

I'm a bit of an outcast in the gay community though, as I'm more physically attracted to men, more emotionally attracted to women, and don't particularly like to have sex with either. I think that was due to my gender nonchalance, and being the go-to guy in college when the straight guys wanted to experiment.

Even though it wasn't something I particularly loved, I was helping someone out with their own sexuality. And, getting my own little piece of Michael every time.

PS: I was so fashion forward, I knew Hawaiian shirts would be in a decade early.

Hi there Patrick, i've made a post about the Anti-Homosexuality Bill in uganda and i would be really grateful to you if you just take a look at it...

Funny that I haven't had a sex drive since a traumatic event at 14, but it recently came back totally hardcore. Its awesome. So now when I get cracked onto in bars, if the guy or girl is suitable, I might consider it.

Tiago- tried to find the site bur it said it didnt exist. I believe everybody should be able to be who they are and totally agree with the message. I think thats why no one has ever been homophobic to me, cause Im myself and I dont change for anybody. One kid in year 7 who didnt know who I was called me a faggot once and that wsa bad enough. I cant imagine what these people in uganda go through. message me the right addy and I'll be sure to sign.

Hello Patrick,
I have this same problem, I have been fully sexually attracted at first sight one time in my life and it was to a woman. I have always dated men never even questioned it, nor really cared much about it til I met her, lol, it was a feeling that terrified me and I instantly told myself to stay far from her. We have been together over a year, lol...
Thx for your story Deni...

Deni,
Thats awesome. I think a lot of gay guys wouldnt even consider dating a woman even if they had feelings for them. To me, it doesn't really matter whats between the legs, it's whats between the ears thats important. Yeah I came out at 17, and then met a girl in Germany who I fell in love with and we were together until I had to come back to start uni. I even lost my best friend over it because it was her older sister. Love is the most important thing in the world so I'm really glad you went for it. I imagine your both happy even if the sex is sporadic. Cheers Deni, wish there were more like you ;-)
Patrick

Deni,
Hey, forgot to ask, do you have facebook? It would be cool to chat. You sound like a cool chick. Add me.
Patrick Kevin James Kennedy
Cheers