"I Was a Teenage Drag King"

Once, I wanted to "be a boy," but had mostly made peace with my female gender. But puberty was AGONY! When I discovered my dad's Army uniforms in storage, I was fascinated by men's formal clothing. While children's clothing had become more unisex, I was interested (as kids are) in the gendered male clothing of adults. 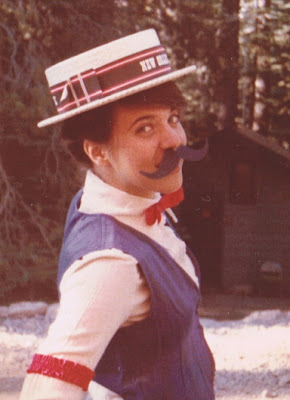 At a costume event, how I could not dandy up as a turn-of-the-Century drag king when I looked so good at it!

I was particularly proud of how I tucked my long hair up in the hat, for a nice profile. Alhough the handlebar mustache may be a bit over-the-top.

My interest only grew, as I was supposed to be differentiating into a "woman." Back then, I kept getting crushes on dead movie idols, like Tyrone Power. My delayed libido couldn't comprehend that I didn't want to do them, I wanted to be them.

At this age, I worked as a summer camp counselor. I'd been bullied in camp before: some girls read me, calling me "lezzie" and "lesbo" there. As a counselor,
I helped (as best I could) a boy struggling with his own orientation, though I was still in deep denial about my own! I'm "gynesexual" - attracted to women, whether I'm considered a lesbian female, or a straight dude.

What's most important about this photo, is how genuinely happy I am here. I look like me. That didn't happen again for too many years. Now, I'm content with my genderqueer self. I don't have to be either/or - I can be BOTH! And that's great!

Oooo - I like it - don't check either box, change the form. Excellent story, JC.
BTW, MP sent me.

Fascinating story and picture. Thanks for sharing them. MP sent me too, but now that you are back a again, google reader will keep me current.

JC, you do look quite happy in the photo. I love it. And you are who you are, and I love you for who you are. Thanks for writing your story.

Very dashing. Cute enough that I might be interested, though that would not work very well for you.

All the best,
Paul the BB

JC, ALL of your "drag king" pics are glorious!! and very handsome!

A real cutiepie and as Mimi says looking quite happy!!

Love ya JC! Love ya!

what a great site, Thank you

Thanks for adding your story to the complex web of stories about gender and sexual orientation. And, yes, you look so happy.

Thanks to everyone who commented!

I've been smiling at this photo for about ten minutes. You look so wonderful and spirited and fun and happy. Thank you for your story and for making my afternoon.