I'm the cutie in the blue and white striped shirt and belt. My grandmother made that for me. I guess she's the one who got me started with accessorizing. She also made clothes for my Troll dolls, and was very protective of me. 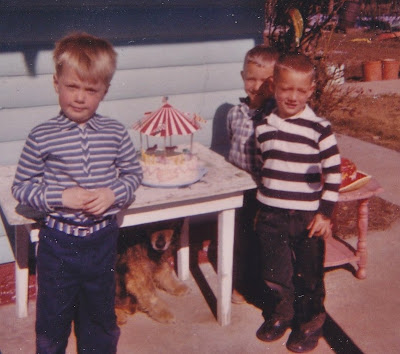 I grew up in a redneck town where boys were taught to hunt and fish and all that stuff. My friends were always girls. I recall playing house with one of my friends and I told her I wanted to be the Mommy, and she sternly told me "No!" It turns out, she's now a lesbian.

Much of my internalized guilt and fear of exposure made me a very bitter and angry kid. I also suspect it played a huge part in me having cancer at age 22.

I remember my grandmother telling my mom that she saw two men walking down the street in San Francisco, acting like they were a married couple. Even at age 6, something clicked in my head and I blurted out to her, 'I want to marry a man when I grow up!'

Of course she was horrified and aghast, and said, "But you can't." That moment I revealed myself to her was the first time I was told that being gay was a bad thing.

I am glad, that you have found love, and I hope that the past does not hold internal scars, because being told something or told not to say something about an issue, can leave little ghosts constantly whispering in your head.

As long as you are happy with your partner and yourself, it does not matter if you are gay or straight.

Hey Nic - I'm also from Quincy, 10 years younger than you, and now living with my wife here in Finland. Maybe it was something in the Quincy water!

Thanks all. kukkaseksi, please let me know who you are.

Love it!! Congrats! I often wonder if the inner anger my 14 year old seems to have could possibly be due to his feelings, but maybe it's just hormones in general, or maybe it's because he has two mothers who don't really know how to be fathers? Who knows... I do know that when I had my "talk" with them, he was six, and he told me then, "That's okay mommy, I'm gay too!" As he was swinging his little light saber around acting like Darth Vader :). I told him then, that loving your friends doesn't make you gay, but who really knows. I do know he wouldn't want to talk about it now, so I leave him alone and let him enjoy his life, hoping he gets past these teen years, and letting him know we are here for him should he decide to talk to us about his life in general!! He does talk to his sister, and he seems to have a crush on a cheer leader, so like I said... who knows!

THIS WAS REALY CUTE. I LOVED THIS SO MUCH. AND YOU LOOK SO CUTE IN THAT PICTURE.

WHAT DID UR GRANDMA END UP SAYING ABOUT YOUR MARRYING YOUR HUBBY?

Loved your story. I'm familiar with Quincy and that makes your story even more meaningful to me. I grew up down in the Valley in California. Spent my summers at church camp near Lake Almanor. My BFF lives in Quincy and I visit her there about once a year. Glad you're happy!

Hey Nic - my name is Sabrina. I graduated from QHS in 1987. I left Q-town for college that fall and never went back. How long did you stay in Quincy? Are you still there?

Sabrina, you probably know my brother Josh. I left Quincy in 1984, after recovering from cancer. @ Kandake, my grandmother died before I got married.