This picture was taken at Dinosaur Valley State Park in Glenrose, Texas.
I found it a few years ago, and my first thought was, "I look like such a girl!" 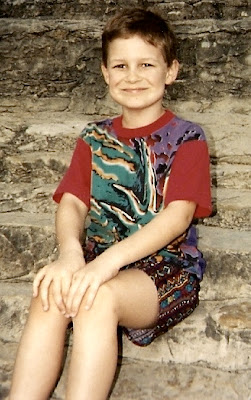 When I was 3, my grandparents took my brother and I toy shopping. My brother picked out a battery operated robot.
I wanted a GoGo My Walkin' Pup - basically a girl's robotic poodle. Amazingly, they bought it for me!

I've known I was different since age 3, but I don't think I'd ever heard the word 'gay' until 14. And I wouldn't admit to myself that I was until 20.

And in Texas, we didn't talk about gay people, unless to call someone a f*g. Throughout middle school, that someone was usually me.

I came out to my family at 21, and they couldn't have been better about it.

Everything is so much easier now that I've gotten out of my own way and allowed myself to be the man I was born to become.

Today, I'm sort of a mixed bag kind of gay. I like being athletic and working out, but I also like quilting. My main passion is being as limitlessly creative as I possibly can, and I've written seven books to date. One is about my experiences growing up gay in rural Texas.

If I could say one thing to anyone questioning themselves, it would be this:
In a contest between your head and your heart, always follow your heart.

Your head is subject to the opinions of the most charismatic person you meet.
But your heart is always the purest, most undiluted voice of who YOU really are.

Interesting. Gay rights are so natural that they dont even need any justification.

Is your book about growing up gay in rural Texas published or available on Amazon? I'd love to read it and send it to a gay friend who grew up in rural Texas.

I'm always here to support you.

This line touched me the most: "Everything is so much easier now that I've gotten out of my own way and allowed myself to be the man I was born to become."

@Hilton: I've just started looking for a publisher. It's written in the spirit of learning to laugh at life, as if saying, "Well, that was uncomfortable at the time, but things worked out in the end." Wish me luck!

@the island guy: Apparently I had to come up with some kind of pose in EVERY picture I took as a child. :P

I seriously cannot believe your story!!! I spent most of my life in Clifton, Texas with family in Glen Rose! I also like working out and stuff, but I prefer cross stitching over quilting....sorry. Your story is so similar to mine I cant believe it!!! The only differences would be I came out at 15 (16 now) and I am no longer in Texas....Love your story...Texas gays forever!