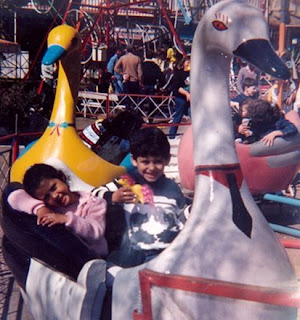 This is me and my sister, and one of my "My Little Pony" dolls, which I collected for 4 years.

As a kid, I felt torn between playing games and toys meant for girls, or those meant for boys.

In my confusion, I didn't know
if I wanted to be He-Man, or be
She-Ra. Hahaha!

I always had more female friends as a kid, and was the target of bullying for it.


I was extremely shy, and I spent my entire adolescence without feeling accepted or understood. I was very inexperienced, and felt I could not approach the girls. But when I was 25, I had my first kiss with a woman.

It was only after entering the theater that I decided to accept myself as gay,
and try being with guys. Once I did, I knew being with men was my true nature.

I eventually told my godfather (who is also gay) and who was a childhood friend of my father. Today, my whole family accepts me and supports me.

Glad your family accepted you, but I have a feeling they already knew since you collected My Little Ponies.
Haha.
And Cute picture, by the way.

That's aweseome. I"m glad that you have found acceptance from your family and also from yourself.

Hi there. Love your blog, but for some reason the last time the pictures showed up in Google Reader was May 27th. There's no point in subscribing if all one gets is the text. Not trying to be an asshat, just letting you know.

Wow i feel really related to the story :'3

I played with my sister's Barbie dolls (well sorta, i loved to play very rough with them... they ended up DESTROYED xD). And I passed for almost everything it says.

I'm still "in the closet" and very inexperienced in sentimental relations. I may try something with a woman (since it has never happened), but i KNOW i wanna try with a man too...

Glad I'm not the only one, i was starting to feel like a monster hehe :)