My road to acceptance was a long one. First of all, know that my father was super masculine major league baseball player Jim Beauchamp, so I had to be his worst nightmare. It took him awhile to get used to the fact he didn't really have two boys and a girl, but one that was sort of "in between." Check the hand on my hip... 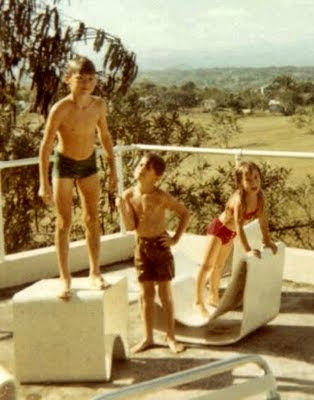 I knew I was gay from the first time I ever heard the word.

When I heard my older brother describing me as "gay" and "sissy," I thought to myself,
"Yep... that's me!"

I really struggled with acceptance of my gender identity up until the age where I hit puberty.

And there was something about that testosterone burst that pushed me over the edge and made me glad to be a guy.

Up until then I was destined for gender reassignment surgery.

I can't remember ever asking for gender appropriate toys, or developing normal friendships with boys. I used to blackmail my sister to get her to ask for the toys
I wanted by threatening, "All right, Ann Rene, I'm squealing if you don't ask for Barbie's Malibu Beach House for Christmas!"

Christmas would come and I would tear through my footballs, baseballs and other sports equipment. But then, I'd join my sister in frantically opening her presents, and we would SCREAM, HUG EACH OTHER, and JUMP WITH DELIGHT at the sight of a new Easy Bake Oven or Barbie's 747 Jumbo Jet.

Every now and then I'd steal a glance at my father slumped in his chair with his, "What did I do wrong? This can't be happening!" look on his face. Poor guy...

LOVE the message! What other choice do we have?

This was a great story. Thanks for sharing :)

Your post made me smile and laugh a little. Thanks!

oh this one is freakin golden. ugh now i wanna meet you! lol

Love it! I remember telling my sister to ask for toys as well! lol