This was taken in the Melbourne suburb I grew up in. I am the awkward-looking kid in braces on the left. I'm standing with my mum and dad, and my sisters, Eve and Chelsea. I remember that I'd had my orthodontic braces removed not long before this photo was taken, so I was feeling like a million bucks - even with the half-grown-out perm. FYI: perms were cool for exactly two weeks in 1995. 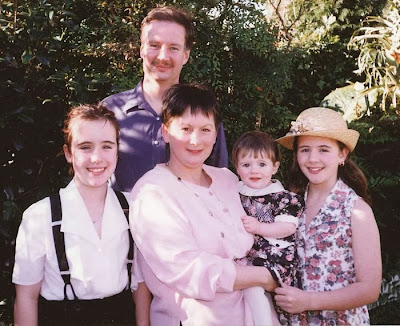 I was a geek at 13. I was an intense, avid bibliophile who was fond of old movies and musicals. When other kids were trying alcohol and cigarettes, I was reading "Wuthering Heights" or imagining I was Sally Bowles in "Cabaret."

I remember being aware of my sexuality at 13, and I had a crush on my English teacher and another student. But being a very widely read kid, I was able to intellectualize it as 'a natural time that many girls go through in their teens' - thank you, Dolly Magazine.

I was obsessed with "Beverly Hills 90210," focused on forming my grunge rock look, and loved watching Video Hits on Saturday mornings. I told everyone that Jason Priestly was my favorite 90210 star, but Shannen Doherty was the one I adored. I even had a poster on my wall of her in leathers on a red motorbike.

I never could understand why it seemed to unnerve my father, but now I know we just have the same taste in women.

I was able to intellectualize my sexuality right up until I came out at 20.
My parents struggled at first, especially my mum, but after a couple of years they came round and are now extremely supportive. As my cousin says:
"Your mum not only changed her stripes, she also bought the tiger."

If I were to give any advice to any same-sex attracted youth, it would be to come out when you feel are ready. And do so in a supportive environment.

That, and never ever get a perm, no matter how "in" it may seem at the time...

So perms were only cool for two weeks in 95? This explains why I struggled so hard as a permed to the hilt from ages 10-13...(years '87 to '90). I'm not gay but I do appreciate you throwing a shout out to those of us who struggled with perms!