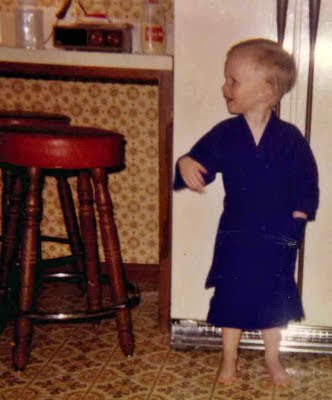 I always felt like a fabulous fish out of water in my hometown in northern Minnesota. This picture perhaps does "scream gay" from my earliest days, one of three in a series of some of my favorite toddler pictures.

This was taken in the days of disco, when I enjoyed playing with dolls, banging the piano, and looking like a young, gay version of Hugh Hefner.

It was only the next year that I had my first kiddie crush on a boy. He was 8 and rode a dirt bike in my neighborhood.

Despite my eagerness to be with him, he and his friends brushed me off as any 8-year old would, to a 3-year old.

I had many boy crushes from TV: Jason Bateman on "Little House on the Prairie" and "Valerie," Mackenzie Astin on "Facts of Life," Todd Bridges on "Diff'rent Strokes," and Scott Baio on "Happy Days."

But I didn't know I was gay until much later, and didn't admit it to myself until I was 19. Nor to anyone else until I was 21.

If I'd known when this was taken (and many subsequent pictures that spoke the thousand words I could only hint at in my young imaginings), I would have told myself that everything would be OK. At least once I grew up and moved!

There was a lot of the world out there to see. And after I saw some of it, I got to appreciate where I came from, as well who I am and have always been.

I adore this picture!

what a great picture. loved your story also

This is so funny b/c my son is so into his blue robe, we've taken to calling him "Hef." Except for the fact that he has longer, darker hair, this could be him! :)