Stephen, age 4
Ponoka, Alberta, Canada (1989)
I was awkward as a kid, like being accident prone. Also I was probably the tallest person in my school throughout most of my elementary, middle, and high school years. So I stuck out like a sore thumb. It bothered me, because when you are different when younger, children are cruel. 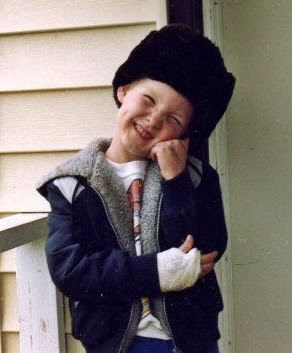 As early as age 5, I dressed up in my mom's clothes, playing with her makeup.

I eventually figured I was too old for that kind of stuff so I stopped. It didn't mean I didn't have fun doing it though. It was always nice.

When I was 13, I started to realize I liked other boys.
I KNEW I was different earlier, but this was when hormones happened.

My parents were far more accepting of the things I did than I give them credit for. My dad was always saying things like "F*g this" or "Queer that" and I guess that's what happens when you are raised Catholic. He just didn’t like gays.

But when I told him I was gay, he seemed to change his whole perspective, which is a good thing. My mom always said, "It's your life. Do what you want with it."

After suffering through a couple years of depression after coming out, I look back on my picture and think "I'm almost back to being that kid again. Not caring. Just happy." And I really am. It's a long process though.


Words of advice to all my fellow LGBTQ people:
Go into your childhood photos. Find a picture of you looking happy, and tell yourself that you will be that happy again. That has worked wonders for me

Hi Stephen - your story really encouraged me. My parents were very unaccepting and it took me a long time to accept myself as a result. Then I went through a horrible few years and developed PTSD. One of the things that keeps me going is knowing I can be just like I was when I was 8, before I had to worry about what my parents thought of me, before I tried rejecting who I was, and before I went through hell and back again. If you can get to that point, so can I. Thank you.

@Icanfly>> I want to just hug you and tell you it'll be OK.

The OP and you reply has literally brought tears to my eyes.