Justin, age 7
Kendal, Cumbria, UK (1989)
I had two obsessions as a child - clothes and dancing. My mum took my sister to ballet lessons, which I insisted on attending. And to my father's utter disbelief, she actually dressed me in a leotard with ballet slippers. I even had leg warmers. 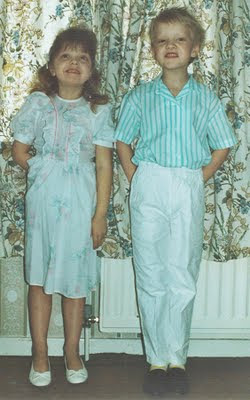 This concerned my father so much, he insisted I take rugby lessons to man me up. And I hated them.

Not because I didn't like rugby or that I was terrible playing it. I just felt really out of place.

The other boys on the team took an instant dislike to me. Eventually, my dad and I compromised, which meant taking tennis and cricket lessons.

So, I was allowed to keep dancing and drop the traumatic rugby lessons.

I never realized I was gay until I was 14, and was not comfortable with it until much later.

I remember saying "I don't get it," and someone said "Well, you must be gay." This placed the seed of doubt in my mind. Weeks later I knew for sure, when a friend found his mum's very graphic videotape called "A Guide to Sex." The woman in it didn't interest me, only the man. And, my two best friends.

I don't know why it took so long for me realize who I was, or why I found being gay so difficult to accept. In my mind, being gay was a weakness. And at the time, I already felt flawed.

I decided to repress everything I felt was gay about myself. I regret doing that,
as it made me so unhappy. It was not until I started art school that I started to accept who I was. The moment I did, my life changed for the better.

And dance you should!

"Today, I'm a menswear designer. And I still love to dance."

And here's hopin' that you and your leg warmers can now dance yourselves all the way to the bank! ;-)

I was born with a strong tendency to love money and desire power. I've had to battle that my whole life because I know it leads to destruction.