I knew from a very young age that I was different from everyone in my family.
I made up reasons as to how I was different - i.e. adopted, switched at birth, stolen, and even that I was half alien! As a young child I detested dresses. The only way I would wear one was if it was blue, so I was always dressed in blue and my younger sister in pink. 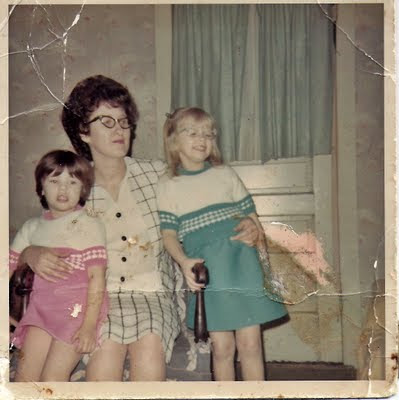 One year in high school a butch girl was in my class. I was fascinated by her and sat next to her all year. She wore mens' clothes and had a pocket watch! I was too afraid to talk to her, but I defended her almost daily to all my friends. I still remember her with fondness!

I never knew that women could be together until after I was already married.
I broke up with my husband and came out when I was 33. And now my ex husband introduces me to other women as a marital aid! He still regrets that.

My oldest daughter outed me to my family one Christmas, by walking in the house and declaring "Merry Christmas, my mom is gay!" I didn't find this out until two years later.

Let me say that I am not your stereotypical lesbian. I am fem, have 3 daughters, and 3 grandchildren. I love being gay, and that was what was missing from my life as a straight. And I will never go back!

I've recently started doing drag and love that too. I love pushing the envelope and making people think. I believe that we can be anything we want, as long as we have fun and hurt no one.

As for the gay youth of today, I think they are on the right track. Being gay is way more open and accepted then it was when I was young.

So try to be true to yourself, and everything else will come.

I never knew I was a lesbian either til last year, when my husband also suggested I be with other girls for a martial aide. Only been a year still alot of issues, but my family knows and are ok with it, except my little sister, but IDK.... thx for the story