Richard, age 2
Seattle, WA (1979)
Yup, that's me in a dress. I was 2, and a neighbor had given my stylish mom a hand-made, hand-me-down patchwork dress. And being their only child at the time, my folks thought it would be hilarious to have a little photo-shoot. As you can see, I enjoyed it a little too much. 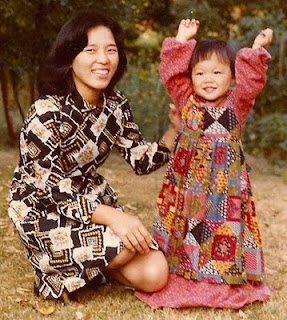 Now, I'm not saying that my mom putting me in a dress made me gay.

I first knew something was up at age 11. I was being called gay and I didn't even know what it meant.

Remember kids, this was way before we could Google stuff.

Also then, I had a poster of MacGyver (my then favorite TV show) on my wall. I recall being drawn into Richard Dean Anderson’s seductive eyes, and we locked lips.

Well, my lips were locked onto a glossy poster over cool Gyprock plaster.

Through my first couple years of junior high, as much as I tried to keep on the down-low, I was subject to bullying. And I would fake being sick to stay at home. Ah, my thespian talents!

By senior year, I had taken those same thespian talents and won over my class, as I proudly owned up to my love of theater. And I let it be known that anyone who labeled it uncool was not worth my time.

It was also senior year that I secretly, semi-officially came out to my best girl friend (who I was rumored to be dating.) Despite being miles away, she continues to me be my rock and is there for me when I've needed her the most.

I came out to my parents when I was 19, after I moved to New York. They were confused and concerned at first, but they knew I wasn't a dummy. And they have always supported me in anything that made me happy.

How lucky am I to have such amazing parents? But looking back on this photo, how could I expect any less from them. They set up my first drag photo shoot!

Dear DollWar,
I appreciate that you're coming from a place of "love" for "gay people" but I'm not sure if I comprehend your "dual world" theory.

I don't know about you, but my world is not black and white - it is multi-colored. Even a black and white photo is made up of various shades of gray. And if good and bad are so clear cut, why do we need a judicial system?

I think that this rigid "dual world" theory may help simplify your understanding of the world, but it's also the very thing that causes pain to those who feel they don't fit these dictated molds.

I certainly agree that people should do research and "follow their intuition and heart" and I think you would benefit from this as well.

There seems to be some confusion that gay people are not male or female. They are - they're just attracted to members of the same sex. That's all.

As for this "gay propaganda" you speak of - there's no propaganda. It's simply people sharing their own experiences to hopefully let those who are struggling know that they are not alone.

And despite being told they are "imbalanced" all people need to know that their lives are just as precious as the next and everyone is deserving of a life full of happiness and love.

As far as I know, science also hasn't isolated the "heterosexual gene" yet either, so why do gay people have to PROVE anything scientifically?

As for the "homosexual agenda" here it is:
Every citizen of the United States, demands the same and equal rights as every other citizen. No one else gets to have an opinion on this, sorry.

DollWar: I love gay people and when I see the pictures is obvious their inclinations for such a young age. But there is only male and female and for me this has something to do with an imbalance of some sort (only my opinion). As you can see, we live in a dual world: male and female, black and white, good or bad, positive and negative.

In my opinion, homosexuality maybe is an imbalance of male and female energy. In the other hand, we are spiritual beings having a human experience and maybe the truth is something related to karmic or spiritual issues. Of course, I know that it sounds strange but we have no answer scientifically yet.

I suggest people to do their own research and follow their intuition and heart.

About the homosexual propaganda. I want to share this. Thank you.

That's a great picture - you both look so happy!

and I've always said, opinions are like armpits. Everyone has a couple and they all stink.. :)

In the end does it matter how you feel I came about being myself, as long as you respect me for being it?

Also, Hello from a fellow not straight pacific northwester. I'm out in the islands. (I'm bi, I can't exactly call myself gay now can I?