Fernando, age 4
Mexico City, Mexico (1979)
Ever since I can remember, I knew I was different from other kids. I liked things other boys didn't like, such as playing with my cousin's dolls, and wearing my mom's sunglasses, heels or makeup. The other boys liked the things I hated, like playing soccer or getting G.I. Joe dolls for Christmas. 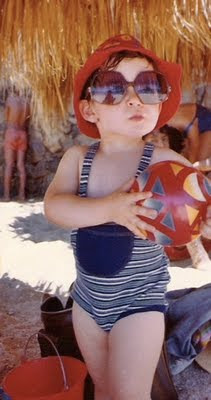 I pretty much grew up that way, realized I was gay at age 13, and came out quite late, at age 23.

Looking back to my childhood, I feel very proud of the courage it took for me to stand up for what I believed in, and to dare to come out.

Especially considering the environment where I grew up: conservative and Catholic in upper-class Mexico city.

At the beginning, the process of coming out seemed hard and painful. Very close to impossible, actually. I felt as if I'd be the only homosexual my friends and family would ever have to deal with.

Pretty soon after I started the coming out process, I realized that wasn't the case. I had my friends' and family's support, but it took a little time.

And to my huge surprise, my three closest childhood friends turned out to be gay as well. No wonder we remained friends all those years!
Posted by DJ Paul V. at 12:13 PM