My 1st clue that I was gay occurred before I was even born. My mother thought it would be an excellent idea to name me "Billie" i.e. after Billie Holiday. As a tomboy growing up, and later as an androgynous-variety lesbian often hit on by gay men, I find it hilarious that I very easily could have been named Billie. 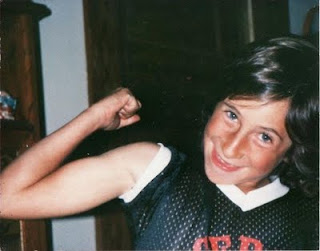 I mean, how much more confusing would that have been when asked the dreaded "Are you a boy or a girl?" question?

That was often flung at me at recess.

Later in my life, it was the gay guys who'd ask me, "Hey there cutie, what's your name?"

The 2nd clue that I was born gay can be seen in Exhibit A:
This photo of me showing off my guns in my Little League uniform.

I loved sports, was on every team imaginable, and was often the only girl on the team. Especially SOFTBALL and BASKETBALL. Yes, I wrote those in all caps, because they are - after you include GOLF - the most lesbian of sports possible.

The 3rd and most compelling clue of my innate lesbianism, is that when I picture my future, I see two brides walking down the aisle. And later, having my own children whose first words are "mama" and "mommy."

And you know what? I feel extremely grateful that in a world that may sometimes frown on this particular version of a happily ever after, I can live each day feeling proud of who I am.

Yup, I am excited about my super awesome lesbian future.