Looking at this photo, I have more questions than answers. Who is that man? He looks exactly like my father. And, he looks like a loving dad spending quality time with my sister and me. But, I certainly don't remember him ever doing anything like that. Notice the grumpy look on my face, testifying to the fact that I was coerced into posing for this, when all I wanted to do was to get away. 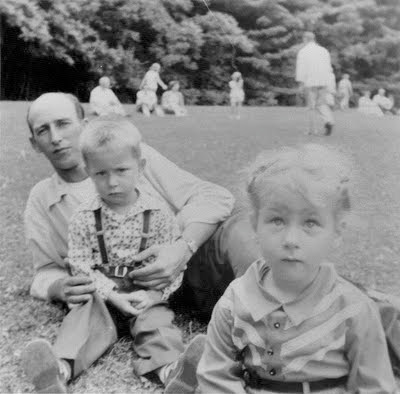 My mother abandoned us when I was about 10-years old. My father was a spoiled only child who, as an adult, was never around kids until he married late in life, and then we came along. He was never mean or strict, but he was never close or affectionate, either. And he never taught me anything.

But, I can't blame him. He simply didn't know what to do with kids.

Did he know that I was gay? Probably.
But he never said anything, and I never felt the need to say anything myself.

I went to a very small school where I don't remember ever hearing the word, "gay." So, I can look back and be thankful that I was never bullied. In class,
I always sat among the girls, where I felt like I fit in.

I wasn't interested in anything that the boys were talking about.
Not surprisingly, I was terrible at sports and hated gym class.

It's hard to say when it was that I first knew that I was gay. I can remember,
as a young teenager, my attraction to an underwear model whose picture I saw in a catalog. But, I didn't know that my feelings meant anything unusual.

Hopefully, you didn't "pigeonhole" the rest of us 'only' children as "spoiled"....