I was born in Oklahoma. My mom was 2nd generation Sicilian and my dad was from Missouri. My sister remembers this as her baton-twirling costume. I don't remember wearing it, but I'm sure my mom thought it was harmless and funny. 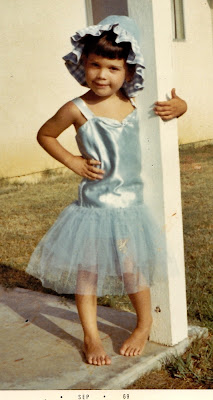 I remember as early as this age, that
I loved feminine things, art, and playing "doctor" with my cute neighbors. I guess I was very curious and cute myself, because I remember older boys flirting with me.

I was in chorus and the band, like many of us back then. But I also remember being the only boy to choose
"disco class" over football in Jr. High.

And, my mother said my father "always knew."

As a young teen, "The Rocky Horror Picture Show" played at the local theater. I went done up as Frank N. Furter and dethroned the person playing him. I realized that if I was performing, I was more powerful.
I was always misstaken for older, because my makeup was so fabulous.

Then the 80's arrived, and I soon discovered Hollywood and other out-of-the-closet gay teens. The Odyssey club in West Hollywood was an under-18 disco,
and I had my first gay kiss there. My look was compared to Marc Almond from
Soft Cell. We all loved Boy George and the freedom to cross gender barriers.


In 1985 I moved to New York City and quickly became part of the night life.
Drag culture had taken over Manhattan night clubs, so I added tits to my new romantic looks, and eventually morphed into a drag queen.

Within a year, I was hired by Patricia Field as a stylist. I also won a drag contest at The Boy Bar club, as Miss Perfidia 1986. I lived with established drag performers who trained me well, and I took my show all over the world .

My crowning achievement as a drag performer is seen in "Wigstock: The Movie," which really showcased NYC as it was back then. My Perfidia's Wig World shop is featured in the movie, as well as my performance.

My interest and talent with wigs eventually lead to Broadway. My designs were seen in "The Pee Wee Herman" show on Broadway for HBO and I was also responsible for the wigs seen in the cult TV classic, "Strangers With Candy."

Most currently, I am styling for "Hedwig On Broadway."

What a great idea for a blog!

As a little queer kid, Strangers with Candy was one of my favorite shows! Definitely got me through the rougher parts of middle school. Thank you