When I was little, I often wondered how long it would be until I was big enough to drive that tractor. That day I was obviously too little, so I played on it and sang "Delta Dawn" by Helen Reddy. I don't remember doing it, but I know that is the song, because my lovely mother noted it on the back of the picture. 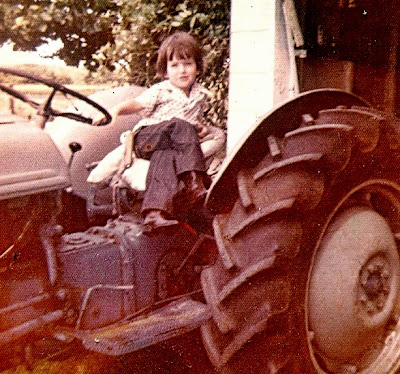 When I was in 2nd grade my teacher called my parents in and told them she thought I was gay. I suppose I was posturing in a way that was too masculine for her liking. I never knew of this accusation, or even what "gay" was at that time. But when I came out in my mid 20's, my mother told me about it.

I had frequent crushes on girls - sometimes my best friend, but not always - mainly starting in high school. I had 3 different boyfriends then and into college, but they just served the purpose of someone to go to events and dances with.

I kept my sexuality under tight wraps until I was in graduate school. The only hard part about coming out was watching my parents cry. And cry, they did.
But they came around a few months later.

Today, I am a completely out gay in a smallish town in Texas. I've been called a dyke on a few dozen occasions. "That's Dr. Dyke to you," I respond, with a smile. I love being gay, and I can't begin to imagine being any other way.

When I look at this photo now, I think about how big that tractor seemed to me back then. As a grown-up, on occasion, I drive much bigger tractors than this.

Oh no... please don't truncate your feed! No one likes a truncated feed, especially on a blog as wonderful as this.

I lovely young girl, tractor and all!