That's me on the left with my niece Denise, playing our favorite game of "house," which we called “Billy." Of course, I was ALWAYS Billy - the protector and the adventurer. As long as I can remember, I enjoyed dressing up, and pretending to be someone other than myself. 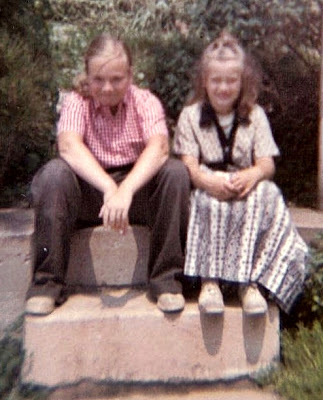 I was equally comfortable pretending to be a rock 'n roll singer in a band, or donning a costume as a bit part in a dinner-theater type show.

I was raised as an only child and was very involved in theater. I felt most comfortable and happy around actors, although my parents were very leery, referring to many of them as "queer."

Although I knew perfectly well what they meant, I never let on, as I was afraid they wouldn't let me associate with them.


As a heavy child, I was called a "lezzy" well before I even knew what it meant. While I suppose I always knew I was attracted to women at some level, I felt I had to act or dress up like a boy (and PRETEND to be a boy) to get away with it.

While I look fairly butch here, I later preferred being rather androgynous. And I ended up being a very late bloomer, not coming out until I was in grad school.

I refer to that realization as my Technicolor moment, like when Dorothy opens up the door to Oz to find her drab black and white world has become full of color.

Today, my partner and I have 6 adopted children.

And our kids have no problems having two "mommies." As a matter of fact, my youngest asked me to accompany her to a father-daughter dance recently, and I even got to wear a dress!

THIS WARMED MY HEART SO MUCH.

What a brilliant post. 6 children! Thats fekkin' awesome. ♥ How on earth do you cope?

Remember to come and enter Caption my Freak Photo Competition

Wow, I have a photo almost exactly like this of me at age 8. Same clothes! Rock on, Beverly!

OMG...I LOVE your story! 6 adopted kids!? That's exactly want I want to do (adopt a lot of kids)..whether I'm single, with a male, or with a female (I currently don't know what my sexual orientation is...still growing).