I was always a "tomboy" growing up. My parents allowed me to participate in team sports, which was rare for girls during the 1970's. The organization I played for was called Miss Softball America, and they wouldn't allow girls to wear sliding pants. So we had to wear these mini skirt/shorts combinations. 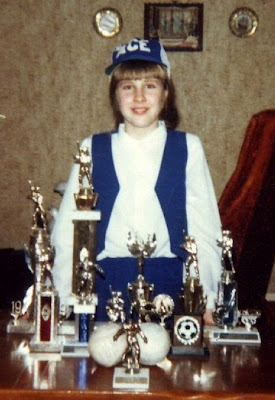 I grew up loving softball and was the only freshman on the Varsity team in high school.

I started getting crushes on girls that I played softball with when I was around 8-years old. Of course,
I didn't think of them as crushes.
I just thought I was normal and that everyone felt as intensely towards their friends as I did.

My family was ultra conservative and religious, so I don't even remember hearing the word, "lesbian" until I got older.

I was never really interested in boys, but had some boyfriends growing up. Usually those boys liked me, because I could play ball with them.

Even in high school while my friends were going boy crazy, I was too busy writing poetry for my female friends. I still didn't think of myself as a lesbian.

It wasn't until I moved out on my own that I discovered my sexuality. The first time I kissed a woman, I finally understood why I had never felt passionate about a man before. It was a completely different experience, and it felt totally normal. My childhood of crushing on girls finally made sense!

That was many years ago, and I have never felt ashamed or wrong. And I have to laugh when I see people saying homosexuality is a "learned behavior."

I was totally and completely exposed only to heterosexuality as a kid - and I still came out gay. And I'm still playing softball today. Now at age 41, I'm loving my life as an out and proud lesbian.

I will always be proud to call you my friend! :) Great post!!