After years of hating to look at photos of myself, this is one of my favorites. Because even though there is a happy smile on my face, there is still something different about this little boy! 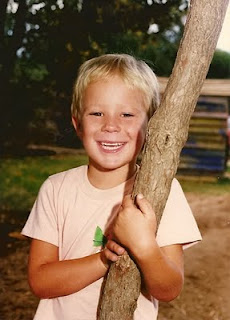 The name calling and bullying started in 2nd grade. I had no idea what a f*g or a poof was, but I knew it meant I had to try to hide it. But I didn't know how to be what society wanted me to be?

While I loved to play dolls and stuff with my sister, I was obsessed with cars and bikes and doing stupid stunts. So I felt completely confused.

When I was 11, it started to make sense: I was a boy who liked boys.

I was also a boy who liked doing girl and boy stuff. And once high school and hormones hit, things got worse. My flamboyant side shoved its way out even more. I hated being me!

I desperately wanted to "own up" to who I really was, and though everyone else knew it, how could I admit to being gay? Then in 10th grade, enough was enough and I came out. The bullying got worse, but I felt secure in myself.

If they were going to torture me, at least I knew it was because of my honesty.

My friends were fine, and not a bit surprised. But I never knew how to tell my parents, so one Wednesday night while watching TV, I just blurted it out.
I was dizzy and in tears. I swore they knew, yet they said they had no idea.

After a few rocky months, they came around. I'm now 27, and have been an out and proud gay man for over 10 years, and life couldn’t be better!

Things HONESTLY do get better.

Just hang in there, and you will figure out how to be the "you" that you were meant to be. And you will do it with your head held high!

what a cutie. that smile is just awsome. i am glad you came to terms with yourself while growning up.
i am glad that i never had to go through the name calling or bulling while i was in school.
how true you are. everything does get better as time goes by. all you have to do is be happy with who you are.
take care.

I'm so glad there is someone out there like you who is there to reassure people that things DO get better :)

Cool story and wow what a small world! I live in Adelaide too! What school did you go to? It would be cool to talk to you!

Wow Marc, it is a small world. I went to Christies Beach, what school did you go to? Leave me a comment if you like, and ill forward my email addy.