DJ, age 3
Prince George, Canada (1978)
I have only a brief flash of memory of this photo, but I have a happy memory of it. I was the kid that moved a lot, and finally laid roots in Sussex, NB Canada till I was 16. I was also the kid that everyone picked on. 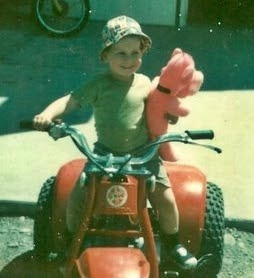 The "gay" taunts started in 3rd grade, and were constant. I had a rough life at home, and somehow survived the cruel hell of school kids' taunts, fights, and abuse at home.

I didn't know I was gay till about 12, and my first boy crush was at 14. He was the boy next door that was just out of reach.

I had very few real friends, most of which were girls, and was NOT the popular kid.

I remember my fascination with Madonna in 1990, as I was "voguing" along with her in the video. Ditto with Paula Abdul's "Cold Hearted" video.

Looking at this picture now, I think my smile is what got me through a lot of the hard times. I think being gay gives us a unique spirit, and it's a strong one.

If I had a message for those out there going through the rough times like I did,
I would have to say: It can't rain all the time.

If you stand up to be who you are, and don't give in to the hate, you will be the one driving the Mercedes. And those idiots that once taunted and hated you? They'll be washing it for you. I have seen it many times.

Karma has a funny way of dealing with those people. So just smile, and walk on.
There are better people out there for you.

After a lot of turmoil growing up gay in backwoods places, I am now in Calgary with my partner of 9 years. We are both out, and proud. I am living proof that "Fairy Tales" can come true. So hang in there, because it does happen.