Roger, age 11
Plettenberg Bay, South Africa (1966)
By the age of 5 I knew I was different. I grew up in a small coastal resort town, population then of about 1,200 people. Pop culture frightened me then, and
I switched off the radio when "modern music" was played. 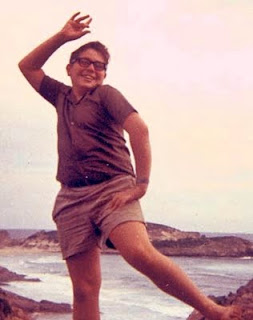 One night, I'd wondered away from the colonial stone terrace, where the parents were being served drinks by the staff in their red-sashed, white uniforms.

Down a long grassed ceiling passage, through a bathroom doorway slightly ajar, I came across our hosts' son taking his early evening bath.

The reflection of candle light on the clear water in the white enamel bath, the fragrance of the grass roof, the shiny and smooth soap-scented muscled body, and the rough male kiss of fresh towels reverberated in the very depth of my being.

I was 21 when I told my parents I was gay. They asked, "What does that mean?" "Homosexual," I stammered. And it was left like that, and never spoken of again.

At 8-years old I fell in love with a nameless, dashing soldier dressed in full mess kit. His hand extended to a beautiful lady in a turquoise frilly ball gown, in an invitation to dance. He was on the cover of my first LP, and I played the Viennese waltzes over and over again, until I knew every note and was dancing with him.

you were a beautiful boy and glowing!