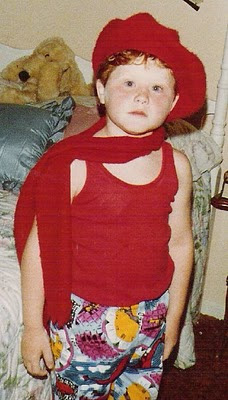 From an early age I was one of those little boys that liked to play dress up. I never cross dressed exactly, but feminine accessories interested me.

I was about 6 when my grandma caught me playing with her "robber purse", a decoy purse with a $10 bill she left lying around the house.

At 8, my cousin caught me trying on this French beret and scarf, seen in my pic. I guess I grew out of all this, as I'm not at all into fashion now, and never wear scarves.

I'd be lying if I said I knew from an early age I was gay. I suspected in high school, and didn't really deal with it until I was in college. The writing was on the wall though.

I did always know that I was a little different, and more quiet and contemplative than most kids. My favorite things in the world was watching "The Golden Girls," "Designing Women," and "Steel Magnolias" with my grandma.

This was all fun and normal to me, until I grew up enough to be tainted by the outside world's idea of what "normal" was.

My family was great though, always letting me just be myself. When I finally came out to my folks, their response was that they had suspected it since I was barely 5 years old!

There was actually a big "what if" discussion about it, when I came swishing into the room, as my parents and their friends sat around at a party. In hindsight,
I wish they would have told me.

My coming out may have been easy, but it didn't make growing up gay in small town Mississippi easy. Peers were not so understanding, and life was pretty tough until college. But as I have grown up, things have gotten better. And in college,
I finally began to integrate all the feelings I had been having.

The biggest thing I want kids to realize, is that all of those things that made me so different back then, just make me interesting and fun to others now. When I talk to my gay friends about growing up, most of them have had similar experiences.

So to all the questioning, curious, LGBTQ kids out there, I say: Hang in there!
Just be yourself, and it will all come out in the wash.