Katherine, age1
Chicago, IL (1960)
That's me on the left, being pushed by MY OWN MOTHER to kiss my second cousin Cheryl. I found this in some boxes of old pictures at my dad's house. Though both my parents had been through those boxes numerous times to rummage for scrapbook-worthy snaps, they never chose this one.... hmmm. 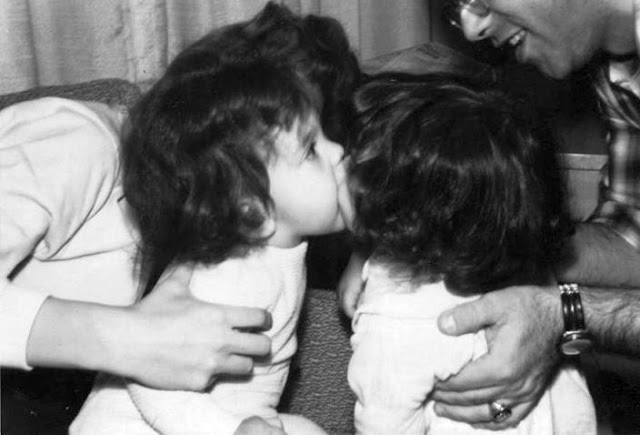 Many years later, on the night my mom and I had that conversation, she asked, "What did I do to make you this way?" I wonder now if she was thinking about this picture, pondering: "DAMN. She was fine until that one idiotic party when someone had the bright idea to make the two adorable moptops smooch."

My mom died 5 years ago, and I wish I could have told her that the Christmas party incident recorded in the photo did not "make" me a lesbian. She certainly knew that the other girl in the picture was not a lesbian, so maybe I'm wrong.

I never needed mom's help after that to move in the direction of other girls!
Anyway, I love this picture and I'm glad I rescued it from cardboard box oblivion.

My message to young gay people:

Your family members value integrity, honesty, and loyalty - more than they value observance of social conventions. Or an adherence to a presumed moral code. But, give them some time to remember this after you tell them.