Matt, age 9
Schaumburg, Illinois (1983)
I'm Matt, and this photo was shot while I was visiting my cousin in Phoenix, and her neighborhood friend came by for a swim. The following is my story... 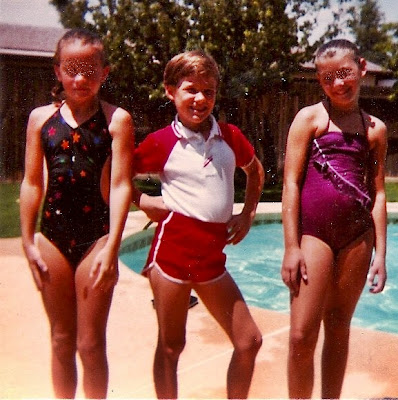 I remember during recess, running around pretending to be Wonder Woman. After school on Fridays, I would sleepover at my cousin's who only had Barbie dolls to play with.

I was juggled around A LOT as a kid, due to my mother being terminally ill with MS, and my father working the 2nd shift at the airport. Because of this, I didn't have many friends and had always been a shy loner.

Junior High came around, and that meant changing/showering in front of other boys during gym class. I knew for sure now, that I was more attracted to them than I was to girls. My parents might have also sensed this, as they promptly enrolled me in a Catholic high school.

A kid on the bus once asked me whether I liked Playboy or Playgirl magazine. Not knowing what either was, I answered the latter. I figured with word "girl" in it, I was safe. The same day, a bully on the football team threw his meatball sandwich on me during lunch, but luckily a girl lent me her cardigan uniform.

It wouldn't be until a year after graduating from college that I came out to my friends, and a year after that to some of my family.

Today, I am finally comfortable with who I am and no longer feel ashamed to admit to my sexuality. It's ironic that those who knew me as a child, say they weren't surprised. Yet people I meet as an adult are usually surprised.

Perhaps I should cue the "Charlie's Angels" theme song and strike that Farrah Fawcett pose more often. Or spin around with my Lasso Of Truth?

He is really giving those girls a run for their money standing in the middle! Just totally the life of the photo!

We've all known boys and girls from our youths who always seemed to march to their own drummer. Today, they lead the band!

I thought I was the only person in the world who knew who Dirk Benedict was and had his poster on my wall!!