I'm on a vacation here, riding a kid's motorbike on a little racetrack at a fun fair. Every night I begged my mom for money to go another round. I grew up in a small town in the center of Germany. I always liked skating, biking, or building igloos in winter, more than playing with dolls, dressing up, or playing hopscotch. 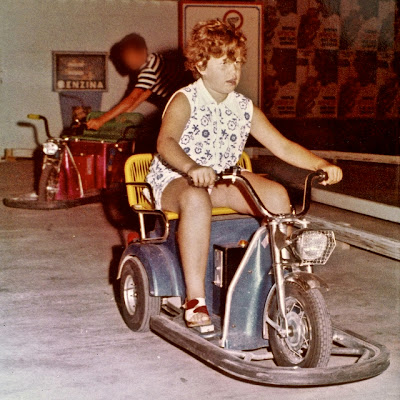 The first crush I had was on a woman, and early on I was fascinated by lesbian love. I had gay and lesbian friends, yet I was always dating men. In my mid-20s I had my first one-night stand with a woman.

Although this was a fascinating experience for me, I only really quit trying to be straight in my mid-40s. My coming-out to my friends, colleagues, and family members was in 2009, after I had fallen in love with a woman. We had met during my visit of a mutual friend in the USA and fell in love almost instantly.

We continued our 17-hour-one-way long-distance relationship for almost a year, seeing each other only every couple of months. I split up with my then-boyfriend a few weeks after I returned home. I came out in a long e-mail, to about 70 people, including my boss. The response was overwhelmingly positive.

We got married in April 2010. She moved across the Atlantic last September, and we now live in the Netherlands, where gay people have identical rights as straight people. Even though we married in Iowa, I couldn't apply for family-based immigration, because Federal US immigration law doesn't acknowledge us as a family (Defense of Marriage Act). Therefore, she gave up her home and moved her cats and herself here. She is now learning Dutch and trying to find a job.

What I would like to tell every kid, whether they feel they are gay or not, is that it's important to find out who you are and what you want. You only have one life.

Be who you are. Everything else will eventually follow.
Posted by DJ Paul V. at 6:34 PM

Gabi,
I liked that you addressed all of today's youth and directed them to find out who they are, gay or straight and follow their dreams. You are right, we only have one life to live. Congratulations to you!