I'm from the main islands of Puerto Rico, and I grew up among Catholics and conservatives. I became a born again Christian at age 18. I left the island in search of knowledge and freedom and became a Ph.D. in California, among fundamentalists. A sense of protection and guilt kept me in a closeted jail until I became 37 years old. I traveled the world and was very happy. 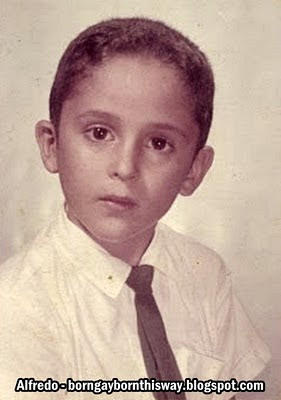 However, I had a secret, double life in which I searched for freedom and peace. It did not matter how much I did for anyone. No one seemed to be happy enough to give me peace.

Since age 4, I knew I was attracted to men, but I couldn't say it.

French actor Alain Delon made me crazy everytime I saw his picture in a magazine.

I was also attracted to the Catholic priests at my school. They were missionaries from the United States. A sense of guilty pleasure came to my heart each time I was at Mass. Therefore, Church became my refuge. But can you not see how sad my eyes were? Each time I look at my school pictures, I remember exactly how lonely I felt and how aware I was of my uniqueness.

My last attempt to find peace was my missionary journey to Japan. Oddly enough, rejection and intolerance was the response I got from friends whenever I spoke about my struggle. And oddly enough, my best friends were Christian missionaries and pastors.

Have you ever been in the same kind of jail? I was, until the wonderful day upon returning to my island - the same wonderful day I fell in love at 37. It took my mother a weekend of tears to deal with it. But it only took my aunts two minutes to tell me, 'We all knew. Be happy.'  And so I have been since then.

14 years have passed, and I am free, happy, and full of love and peace. Did I change? Not really. I live the same way I used to live. I do the same things, go to the same places, but I am the freest man in the world. I have allowed myself to love and be loved.

As for Alain Delon? Well, thanks to YouTube I can see him every day, if I want. Thanks to life and freedom, I have my own Alain Delon.

There is no better way than one's own way. There's nothing better than waking up to life, on my path as the one person who needs words of love, encouragement, and peace. It reminds me that although as a child I was afraid, as an adult - I can make a difference.

If you're still in "jail," make sure you're out to yourself, and talk to many of us that are willing to listen and share. There is an Alain Delon waiting for you, too.

"There is no better way than one's own way": I love this.