Jared, age 4
Jalisco, Mexico (1993)
When I was a little boy, my aunts thought that I was as beautiful as a girl, so they found it funny to dress me as one. They let my hair grow and grow until it looked like a girl’s. Then, they started taking me out wearing dresses, and telling people I was Jared, their beautiful niece. 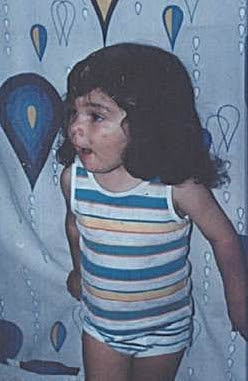 I don’t remember when they started this ritual - that I now call 'my gayest era' - but I remember the day they stopped doing it.

We were lined up buying some tortillas, and the other ladies told my aunts how gorgeous they found me: 'She is so pretty! She must be a star from TV! One day, she'll be a Beauty Queen! I want her to marry my son someday!'

Well, I had to pee - so I found the nearest tree, took out my penis, and peed. And I think my aunts have never been more embarrassed.


Maybe my aunts feel guilty now for me being gay, or maybe they think I'm gay because they used to dress me as a girl. The truth, is that I was already gay - it didn't matter what clothes they put on me. Now I wear mens clothes and don’t really fit any gay stereotype.

I think being gay, straight, or bi isn't really important. We shouldn’t care about it, because we're all made of water, and I am pretty sure that water doesn’t care if the body it's living in is in love with or having sex with a male or a female, because each one is also made of the same water.

I agree we're all different, but being different sometimes makes us the same. I think that we are all raindrops, falling down in some chaos. But the day we finally lie on the earth together, we will merge into a big, beautiful human puddle: The Water of Peace.

It´s my best friend, and he is a beautiful person. Lov u Jaretito :D
Atte: Yutzi-Pop

You are and were, adorable. That last paragraph was very beautiful.

Me encantaba! I love your last paragraphs, and will be directing some of my friends to read this post in particular!