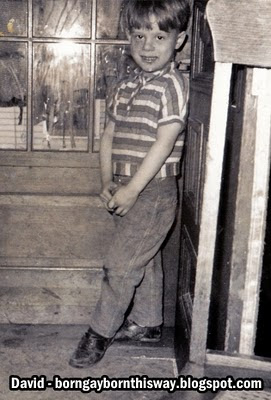 This was taken during summer, based on the dirty dump that I'm posing in. I have vague memories of pictures being taken there, but I don't remember this exact occasion. I'm quite certain that I'm wearing my sister's shirt. And dig the bowl haircut, that filthy room (the kitchen), and the laundry hanging off the porch.

Due to home and school conditions, my sexuality was the last thing on my mind. But never at any point was I attracted to females, and males were to be feared and avoided.


Ultimately, I didn't consider sexuality until my early 20’s. I was stationed in Germany when I began to acknowledge and accept that part of myself. Not a bad place to start the journey.

The biggest advice I can offer is that all things evolve over time. The bad can go good and the good can go bad. You just have to put in the work to keep it where you want it. Just accept that some things are not meant to be. While some things just shouldn’t be, and some things have to be

Cute pic!
But "complete white trash" seems as harsh and an unfair characterization as picking on someone for being gay. I never would have noticed that things were 'filty' or dumpy. You just look like a happy kid :) Ease up. Not everyone is born in the suburbs with 2 garages and a yard.