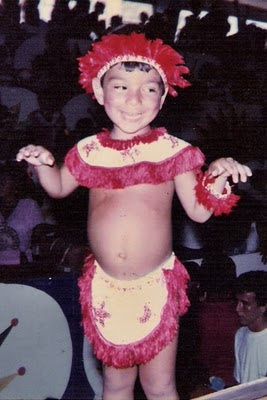 I was born in Rio de Janeiro and lived in Nova Iguaçu. Here, I'm dressed like an indian during a Carnival ball with my parents.

A year later my dad died, and I was raised by mum, who never married again.

My family was very conservative and catholic, and mum was the most homophobic person I'd ever met until then.

I grew up in conflict, because by age 8, I wanted to know what it felt like for those "queer, freak, or abnormal people" my mother always secretly insulted at home.


I came out at 15 and suffered a lot. I was judged, humiliated, and even attacked many times - and my mother was the most aggressive person doing this to me.

It was a great battle to change my family's mind, and it took me about 8 years. Today I’m 27, and my story helped other relatives of mine in the same situation. I have 2 lesbian cousins that came out, and my youngest brother also came out last year, much to my mom's frustration!

I became an arts manager and produced a documentary about the gay life in my city. The film was titled "Nova iGAYçu" and here's the craziest part: My mom was the executive producer! That was quite a change of heart, wasn't it?

But just like my mother, my country needs many more minds changed.

In Brazil, every 3 days a member of gay community is killed, and if we include transsexuals, the statistics get higher. Besides the murders, many teenagers are kicked out by their parents just for being gay or lesbian. And in politics, although many advances have been achieved, we still see politicians getting support from the religious mass to make our lives harder than they already are.

But I see homosexuality as a normal way of life, freer than the hetero way.
And, much happier.

Many things MUST be changed in relation to gay rights in Brazil.
I have a lesbian relative over here and get´s blamed for every bad thing that happens ,being a lesbian in some cities in Brazil is almost like a suicide.
Another gay friend had to move to São Paulo because of the bullying he and his family was going through.
Another lesbian friend has a deep depression and cannot leave her room for a year because she can´t come out to her traditional family.
There must be a proper legislation to protect our people!

Well, lots needs to be done but people like you are a great first step. Making movies and getting the cause out there and publicly talked about is the only way, right?

So glad your mom finally came around, though what a shame to have wasted so many years.