One Halloween, our mother dressed up me and my brother Dennis (age 3, on the left) as Carmen Miranda. For those readers unfamiliar with Ms. Miranda, she was a popular Portuguese-born Brazilian singer, actress, and Hollywood film star in the 40's and 50's. She was particularly noted for her signature fruited turban, which my mother tried to emulate in the costumes we wore. 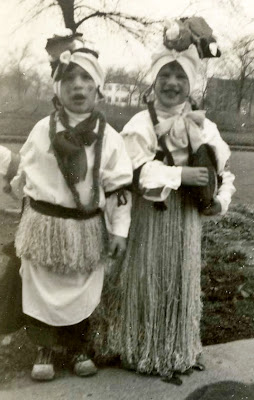 I think she did a pretty good job with my towering turban, long grass skirt, lei, and one of her clutch bags that I used for trick or treating. Most boys this young, of my era, dressed as cowboys or pirates, and I can't imagine that we asked to dress as Carmen Miranda. But we apparently cooperated - lipstick and rouge to boot! - and we look happy with the end result.

At an early age I shied away from competitive sports and much preferred solitary, creative activities like making plaster Disney characters, copper enameling, model kits, wood burning, reading and baking. While I loved making cakes when I was about 9 or 10, I somehow felt that it was an activity that should be kept confined to my immediate family.

I knew something else was going on when I read comics or magazines that had pictures of hunky guys in bathing suits. I would place the tip of my finger over the bathing suit and imagine that these guys were totally naked. I was also smitten with Buster Crabbe who played Flash Gordon in the 50's TV serials. He was later replaced in my heart by Tim Considine, Tommy Kirk, and the other teenage boys acting in film and TV at the time.

I went through grammar school without a girl friend, but in high school did the required amount of dating. On dates, I'd often find the waiter more attractive than the girl I was with. While he wasn't famous back then, Harry (Harrison) Ford lived in my neighborhood. He was in his "hood" phase at the time, and was often out strutting around dressed totally in black. And I thought he was quite sexy. Anyway, by my early 20's, I was going to the gay bars in Chicago.

Around that time, my brother came out to me, and it wasn't long after that our parents learned that they had two gay sons. After a bit of a rocky transition, our parents became very accepting of both of us.

I'm now a retired businessman living in suburban Chicago with my wonderful partner of almost 38 years. We will probably be "civil unionized" this summer, now that Illinois has passed a civil union law. We might also go to Iowa and get married, although we'd much prefer to do so in our own state.

My brother Dennis, seen in the picture, had a wonderful life. But he was gone too soon, and cut down by AIDS at age 46 in 1993. I wrote a little speech for his memorial service, and in it I made reference to this picture, wondering out loud about my mother saying: 'What was she thinking?'  The audience, my mother and father included, couldn't help but laugh.

Nature versus nurture? I don't think my mother knew in 1948 what the future held for her sons, nor do I think our Carmen Miranda costumes made us gay. But it was still a momentous beginning, don't you think?