Vincent, age 7
Batavia, New York (1988)
I was in the 1st grade and got cast in a community theater production of
The Wizard of Oz. It began an obsession with all aspects of the show.
I collected everything I could, even going as far as begging my parents for a Scarecrow doll. Every chance I had I would park myself in front of the television to watch the movie. 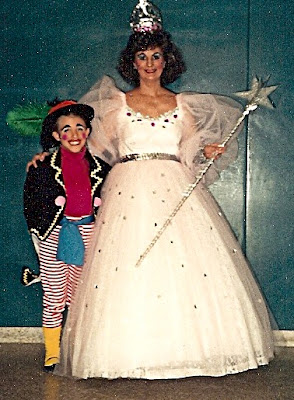 I found my sister’s Dorothy costume and proceeded to put it on, over-sized ruby slippers included. Family was visiting and I thought nothing of showing off my outfit - though my father was less than pleased.

It was never spoken of again, although years later I asked myself, ‘How could he have been so surprised when I came out?’

Theater became a staple in my life. Looking back, it allowed me to experiment with different personalities or be someone different.

Growing up I became more and more introverted (especially after puberty), but theater was a way I could put all that aside and live another life where it didn’t matter. I suppose that was when I started feeling “different”.

The best advice I could give young, gay kids now is to find an outlet like I did. Art is a great way to express yourself in any medium, whether it’s visual or aural. Just putting words to paper can be a great release.