Jurek, age 9
Warszawa, Poland (1999)
I'm the boy being hugged in this pic. The blond kid is a friend that I was attracted to, and I suddenly felt an urge to hug him for the photo. Then I panicked thinking 'what the hell am I doing?' 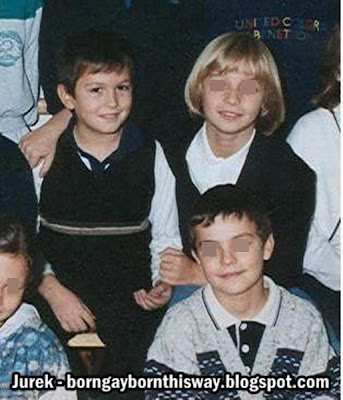 I always knew I was different, and not just vaguely different. I was attracted to boys, no two ways about it. One of my earliest memories is playing on the grass with a slightly older boy, and doing everything just to hug him.

Even doing normal "boy stuff" I felt like an outsider infiltrating a world that was fascinating to me: Shirtless boys on a soccer field, Boy Scout camping, and don't even get me started on sleepovers!

Then came my 'Eureka Moment' when I was 10, during a sleepover with a best friend I had a crush on at school. We were sleeping in the same bed, and because it was a very hot night, we slept shirtless, and really close to each other.

I'll never forget the emotional and sexual tension I felt. I couldn't sleep, and I basically spent the whole night just looking at him sleeping. And I was like:
'YES! This is me! It's beautiful and I feel I'm alive. I LOVE him, and I feel - happy'. Then he opened his blue eyes, smiled at me all sleepy, and I thought:
Yes indeed, this IS it....'

I never behaved "gay" so most people were surprised when I came out. Except for this boy that I just mentioned. We were supposed to meet again at a class reunion, and before we met, I wrote him on messenger: 'I'll have some surprising news to tell you.' And his reply was: 'You mean, beside the fact that you're gay? What is it? Oh, nevermind...'

I had it relatively easy as a gay kid, compared to many. Even though Poland is a strongly Catholic, above-average "homophobic" country, I wasn't raised in a really religious home, so bigotry wasn't going on. And I went to private schools with kids from more open-minded families. As I wasn't a "sissy" I wasn't really bullied at school for being gay. So I can't speak for those who have it really bad.

But my message to gay kids now, is: Choose your friends carefully, and of your really good friends, tell them you're gay. I told most of my friends beginning at 15, and all of them accepted it - because they liked ME as a person. It can be harder to tell your parents, but if you do, you'll probably finally feel relieved.

My own father - a right-wing conservative - accepted me, and when he saw how happy I was with a boyfriend, he begin to be actively positive towards it! And I know many such stories. So don't be so afraid - there are people who are more tolerant than you think

But, if YOU have problems accepting it yourself, think about it this way: You've been blessed with two feelings that are generally considered beautiful - Romantic love, and the brotherhood of two men as friends. It's a gift! And just think how many awesome people were gay! I started with Oscar Wilde...

Oh, and my best friend from the reunion? He let me hug him as we were saying goodbye - and he even took off his shirt for me. And he is straight as an arrow!