I love this picture. I was happy back then as I am now, 44 years later. I've been with my husband since 1989, and he mentioned the pic when we saw this blog. 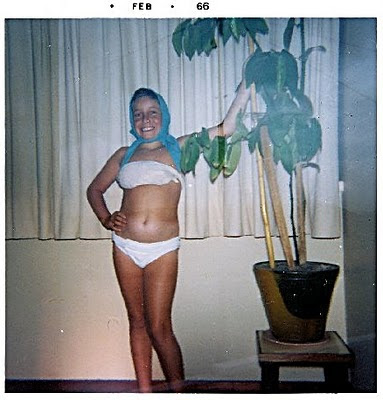 Now, about the pic:

I'd been trying to tell my mom about a coquettish woman I'd seen at the pool we used to go to.

I undressed down to my undies, wrapped a towel around my chest, and put my Boy Scout scarf over my head. I pranced around the room until my dad, who was laughing out loud, took the picture.

My earliest recollection of crushes on celebrities were Sebastian Cabot & Edward Mulhare - as Capt. Daniel Gregg in "The Ghost & Mrs. Muir."

As a kid, I loved watching TV shows like "Family Affair" and "Leave It To Beaver" and I've always had a thing for hirsute men. My husband is a bear!

I knew I was different at about age 14. I could not name exactly what it was, but my classmates picked up on it, and I was teased and bullied a lot. Sometimes painfully so. I did not truly come out until I was 21.

The one thing I would like to tell young gay people is:
Embrace and own your uniqueness!