Alvin, age 4
San Juan, Puerto Rico (1960)
Here I am modeling in front of my Dad's 1956 Pontiac. This is in the center of San Juan, the Hato Rey district. That's a working class neighborhood, and it's where I was called "pato" (faggot) at an early age. Back then, I ran the gamut: 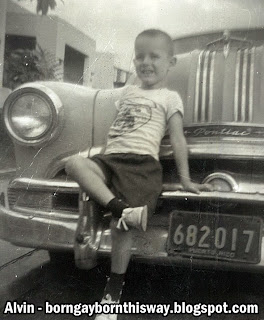 I used to wear my aunt's dresses, put on makeup when nobody was around, dressed up my GI Joe dolls with my neighbor's Barbie clothes, and undoubtedly possessed a sense of fabulousness.

Kids at school used to make fun of my feminine ways, but when I developed a very deep voice during adolescence, they stopped bothering me.

While I never played sports, I became famous in my High School for being our class actor/singer.

Acting and singing during that era was highly respected in Puerto Rico. And if you were a member of the Glee Club, people respected you for that too, and understood your niche in life.

I guess those were different times than now.