This was the first of many 'nightshirts' I would wear to bed throughout my childhood. This shirt, a men's medium, was given to me by my Uncle Ken - who just so happened to be gay, too. 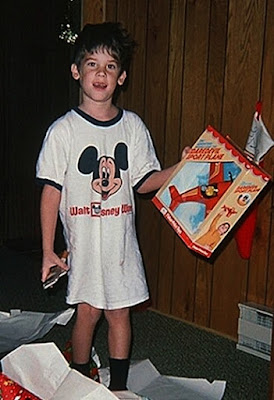 He'd taken the requisite high school band trip to Disney World, and well - all I got was this AMAZING t-shirt. I wore this shirt religiously until there were holes in it that were bigger than Mickey Mouse's ears.

Uncle Ken had a huge influence on me. I guess I knew he was different at an early age. He had long hair and talked about Jesus Christ Superstar a lot.

While Ken wasn't Jesus to me, he was rad and rebellious.

I used to put a dish towel on my head and squint my eyes and pretend to be him. I was only 6!

While I wasn't smoking weed just yet (I waited until high school for that) with shoulder-length hair (which I did in college), I definitely identified with him.

Ken was a 'rock' in my eyes. I was only 7 when my parents separated, and he had a successful, 22-year gay relationship - that I watched with awe as my parents' marriage fell apart. I thought about how he and his partner outlasted the 'normal' couplings around me.

My Mom eventually went to live with my him, his partner, and their lesbian friend. I would visit with my brother and sister, and it was a whole other world.

I now still have a great relationship with my Uncle Ken, who has since married a new man in their home state of Vermont. I was at the ceremony, with MY gay brother, and my Mom's other gay brother.

Yes, that's 4 men in two generations - all gay.
And I don't think it was caused by the nightshirt...

oh my gosh! I just discovered your blog, and I'm loving every second of it. I'm not lesbian, but I truly believe in the spirit of this blog- it's a celebration! A celebration of life, the individual, and all things that are naturally you! In essence the same reasons I started my blog! Keep up the fantastic work and cheers to the weekend :)

I thought I was the only gay kid in Phoenixville! Nice to know I wasn't alone!