Kelly, age 13
Twin Falls, ID (1979)
This is a pic of me and my dog Penny on Christmas morning. Though I tried not to act like a "sissy" as a matter of self preservation, my true nature always seemed to present itself in candid photos, including this one. 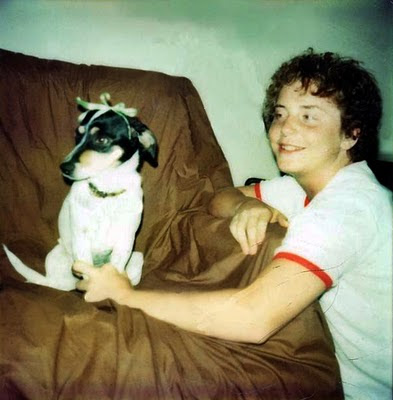 I knew I was gay in 2nd grade. I'd fallen in love with the male lead in a movie shown at school during an assembly. Later, I asked my mom if 'two men could love and marry each other.' After determining I wasn't asking because I'd been molested, she told me 'No, but they could be very good friends'.

Then I replied, 'Well, I'm going to marry a man' - and I stomped away to my room.

I like this photo now, but it took awhile. The curly hair was the result of a home perm I had begged for in an effort to look like Mike Brady (the dad on "The Brady Bunch").

I eventually made peace with the fact that I was always a 'girly boy', much to my father's dismay. The signs were there: I played with my sister's Barbies, cut my jean shorts way too short, and chose to help my mom in the kitchen over working with my father on the car.

I feel protective and sorry for the younger me in the photo. Because we all have a right to be who we intrinsically are - instead of what society or our parents believe we should be.

I hope so, or if not yet, that will some day!

My Partner and I have been together 4 years, and plan on getting married very soon!