Nearly 26 years later, I remember this trip clearly. Chris (far left) and Byron (in the middle, giving awesome face) were my closest friends that summer. We did a full theme park tour and hit Disneyland, Six Flags Magic Mountain, then made our way to Universal Studios. 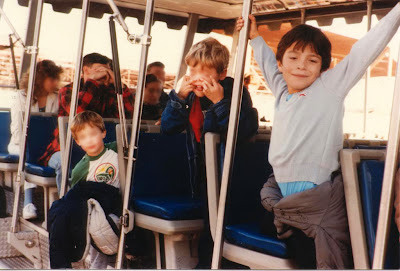 We were SO excited to meet The Transformers in person. Jazz (a B-list robot if there ever was one) couldn't get my name right and pushed us along rather rudely. Don't meet your idols, kids! We also got inside of KITT from "Knight Rider" who allegedly took questions and answered them.

Being skeptics, we made up a song that we sang instead of asking a question, and pushed a bunch of buttons we weren't supposed to touch. KITT then went dark and they told everyone the car was down for repairs. Oops!

Then we saw the Conan The Barbarian live stage show. Beefy guys don't do anything for me, so I was there for the pyrotechnics and giant snake, naturally.

I don't know when exactly this picture was snapped, but it sums us it up perfectly: I was easily the gayest boy on the planet and genuinely not troubled by it. Yet.

Looking back, I see how carefree this boy with the come-hither eyes and fabulous Le Tigre sweater (plus obligatory jacket tied around the waist), really was.

Jay, I love you lots. You are a great man my friend. Ray

Cuteness personified. Did he mean Burt Ward or Jay Ward, the producer of Rocky & Bullwinkle for that crush, though? Either way, how adorably nostalgic!